Writing novels is something that I have always loved to do. Creating characters and putting them into different situations and settings, breathing life into them so that they begin to tell me what they want to do…it just doesn’t get any better than that for me.

There are days that I write for hours…ten or twelve…maybe even longer. I can become so engrossed with a story that I lose track of time.

There is a hazard, however.

Sometimes you fall in love with your characters and they become such a part of your life that you simply hate to say goodbye.

That is what has happened with Amanda and Alejandro from my Plain Fame series (which is re-launching at midnight on Tuesday!). 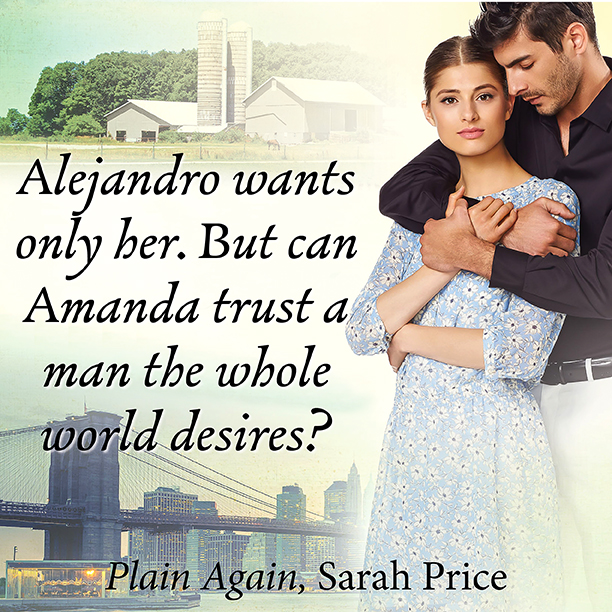 These two people (see? I called them people, not characters!) meet each other under the most unlikely of circumstances. As individuals, they are as polar opposite as you can get. She represents all that is plain, good, and simple while he represents worldliness and success on steroids. To watch these two characters come together and slowly learn from each other, drawing on the others’ strengths so that they meet in the middle, was a fascinating study in psychology for me. Making it believable was also just as exciting.

And it wasn’t easy.

When I first wrote Plain Fame, I knew that the idea was farfetched. But I tried to write it in such a way as to be believable to the readers (as well as myself!). Even the most unusual of situations can be believable if the writing is done well.

Sometimes I meet people and, when they learn that I write, they begin to tell me about how they, too, write. Well, that goes without say. We all write, don’t we? Throughout the day, we write lists, Facebook posts, emails, and text. At work, we write memos or letters or proposals. Writing is one of the first things we learn in school, along with reading.

Sitting down to craft a novel, however, requires more than just writing. It takes knowledge of psychology, anthropology, religion, politics, history, and sociology (to name a few areas of study). Logical transitions between paragraphs is also very important. And it has to be believable.

Sometimes other authors ask me to read their books. While no one is perfect, it does speak volumes when the books is riddled with errors and typos and mistakes and inconsistencies. Part of the requirement for “more than just writing” is editing. Word processors are just as naughty with auto-correct as your cellphones. I’ve seen some really funny errors in other people’s manuscripts—published at that!—that I’m fairly certain comes from not re-reading their own work. It’s distracting, to say the least.

I’m so happy that Amanda and Alejandro were adopted by my publisher, Waterfall Press, an imprint of Brilliance Audio. The new covers and multiple rounds of editing have, hopefully, polished up the books so that the readers can enjoy their story the way that I intended…one page at a time.

2 thoughts on “Why I Love Writing”