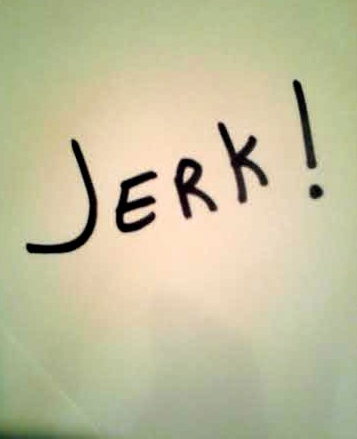 Last week I wrote about Christians being jerks. Apparently a lot of you knew what I was talking about, because there was quite a little response. Sarah Price suggested I do a series. I originally accepted the challenge. Then I declined. Now, as you can see, I have decided to move forward.

Let’s face it. Every person on planet earth has the opportunity to be a jerk at one time or another. The thing is, does everyone give into the urge? Probably–at least once, don’t you think? I mean, sometimes a person is just plain tired, or has a headache, or just got a speeding ticket, or, or, or…

Just because we might have reason to be, or an excuse to be, a jerk doesn’t mean we have to act on it. Actually, the Bible says:

Proverbs 21:23 “Whoever keeps his mouth and his tongue keeps himself out of trouble.”

Ephesians 4:29 “Let no corrupting talk come out of your mouths, but only such as is good for building up, as fits the occasion, that it may give grace to those who hear.”

Proverbs 18:21 “Death and life are in the power of the tongue, and those who love it will eat its fruits.”

I talked last week about how other people watch Christians. Sometimes they may even be waiting for a Christian to mess up so they can say, “SEEEEE, they aren’t any better than anyone else!” (Which, of course, they aren’t because we are all human. We have just found grace and hope through Jesus and with His help we strive to live our lives the way God desires.) You see, to people that don’t know Jesus personally, the Christian IS Jesus. If they see a Christian acting like a jerk, well, that is the impression they are given of Jesus. How sad is THAT?

So, this brings me to the subject of Christian leaders.I’m not just talking about Pastors or Ministers. I’m also talking about small group leaders, choir directors, Sunday school teachers, Bible study leaders–see where I am going?

While the world watches the Christian to see how they act and re-act, they take an especially hard look at Christian leaders. And, when they mess up, it causes not only the world to look away from Christ, but can cause other Christians to turn away as well.

Let me give you some examples:

I had a Sunday school teacher once who was really very good. His teaching was in-depth and he seemed to have a compassionate spirit. But. His. Wife. I ran into her once outside of church and she literally looked away from me. I tried to to talk to her at church and she acted like it was asking too much to speak to me. For me, she negated the teaching of her husband because she was so ugly to me.

I once knew of a prominent pastor who had a thriving ministry. However, he had a reputation around town for being impolite to waitresses and a poor tipper. Which do you think made a bigger impression on people in the restaurant, his big church or the fact that he mistreated his servers?

Years ago I worked in a call center that dealt with churches. One day a co-worker answered her phone. The minute she did, a pastor started yelling at her on the other end of the line. He screamed at her for quite some time and attacked her personally and professionally. The end result was a shaken crying young woman. Not only did he likely shape her impression of all pastors, but can you imagine—if he treated a Christian girl, working at a Christian organization like that…how did he treat people at other business—or at his church? What kind of spiritual damage had been done by this man?

Let’s take this down to teenagers. How about the girl (I’m not picking on girls) who flaunts the fact that she is a leader in her youth group at church, sings in a Christian band, and leads a Bible study? She does all of these things, but, yet, when she walks down the hall at school, she talks about the girls in front of her loud enough for them to hear. Later at lunch she refuses to let the lonely girl sit at “her” table because she “smells”. Um. Every ounce of ministry she has done has now been reversed by her nastiness.

James 1:26 says, “If anyone thinks he is religious and does not bridle his tongue but deceives his heart, this person’s religion is worthless.”

And to those of you who have to deal with the jerkiness of those who should know better–again, I’m going to say, remember they are HUMAN. Keep your eyes on Jesus, not on people. People will always fail you, but Jesus never fails.