What inspired The Faded Photo?

Many people have asked why I wrote The Faded Photo and what inspired me. I’ll address the first question in another blog. For now, I want to answer the second one.

What inspired me to write this book? A book that is a new genre and totally outside of my comfort zone?

The answer is this photo. 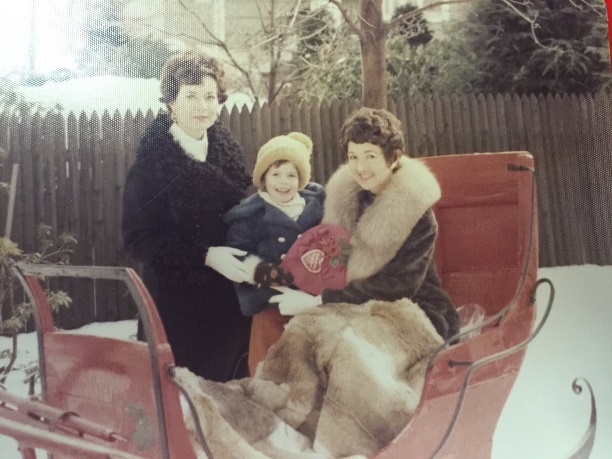 Yes. That little peanut is me. To my right is my mother and to my left, seated in the carriage, is a woman named Mrs. Balentine. I have no idea what her first name was.

And this woman, for some reason, wanted to take her Christmas photo with us. Just me and my mom. I don’t know why. I never thought to ask. I do know that she never had any children of her own and she was a very happy, kind woman. I remember that clearly.

I also know that she died a few months later. You see, Mrs. Balentine had breast cancer and knew she was going to die.

It’s funny how people touch you in very different ways. Her husband later remarried and, I believe, is now deceased. I often wonder if anyone ever thinks about her. Did she have other family? Nieces and nephews that cared about her? Obviously not enough for her to want them in this photo so I doubt they did. They probably were like today’s youth…too self-absorbed to think about other people and what they were going through.

Maybe they turned their backs on her when she was down and out. Maybe she died alone with only her husband to comfort her. Maybe she was misunderstood or forgotten by friends and family who were too busy with their own lives to spend any time on a woman who, at the time, had a disease that was more often than not terminal from the diagnosis.

That’s where I get my ideas. From the maybes. Ironically, the maybes are often so connected with us. I never realized that I relate to Mrs. Balentine on many different levels. Maybe, to some degree, we all do. I’m just happy to know that, forty+ years ago, a little girl in a funny outfit was able to bring a smile to her face when other people were not there to do so.

I remember you, Mrs. Balentine. And now all of my readers will, too.

One thought on “What Inspired The Faded Photo?”