Time for another Echo post. Echo, for those of you who don’t know him, is my one year old blue heeler mix rescue. He is my first-ever dog and I’m over twenty-five years old (no comments from the audience). Anyway, he is constantly teaching me lessons and then I get to share them with you! 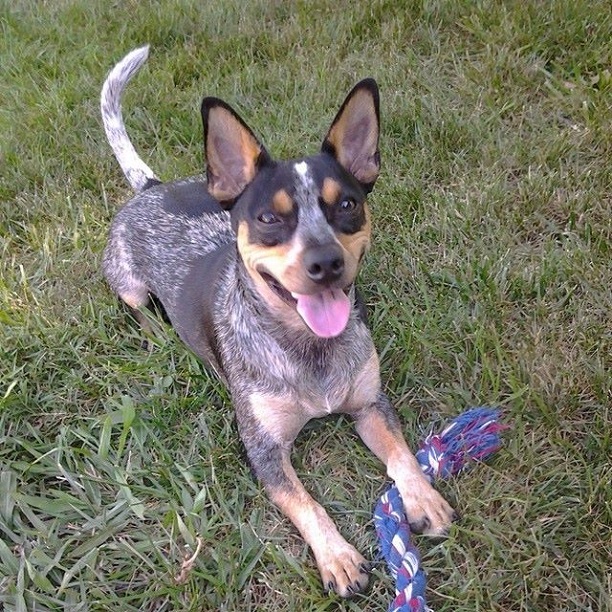 Every morning, my husband and I are up before dawn. We get up at 4:50, which I generally think is an unfortunate thing. Echo would prefer to sleep as well, but as we get closer to the door his excitement grows. As I open the door a deep growl starts within him. Once the door is wide enough, he bolts out and heads straight for the fence.

As far as I know, he is looking for birds. (Of course, the birds aren’t up yet, because it’s still dark and smart people and creatures are still asleep.) MAYBE he looking for cats. Regardless, he makes his way around the fence line, crisscrosses the yard, comes in and heads back to bed. He gets himself all worked up before he goes outside just IN CASE a bird might be in “his” yard.

One day last week I was sitting at the kitchen table after dinner. I heard Echo barking. That isn’t terribly usual for him, so I peered out the window. There he stood, against the fence, barking toward the neighbor’s yard. In the grass sat a very unafraid robin nibbling on something it found in the dirt. Echo barked and barked. But, there it sat. It could have cared less about my dog barking his head off. And, there was Echo barking and whining. It was not so much that he wanted the bird. He wanted the bird to go away. It was too close to his domain.

Soon the robin, of its own free will, flew away only to have another robin fly overhead. Echo took off running across the yard barking and panting looking toward the sky, warning it to keep out of his no-fly zone.

Once robin #2 cleared the air space, he sat down in the middle of the yard. His ears kept moving listening for any sign of an intruder. His eyes were sharp and alert. The rustle of leaf would set him off, running toward the slightest sound.

I stood there laughing at him. He had himself stressed out over nothing. Those birds weren’t going to come anywhere near him. They weren’t crazy! But, there he sat, fretting that one of them would make their way into his territory.

And, then it struck me.

I was watching an example of what worry does. When we worry we just sit and wait for something bad to happen. We think, “I just know that he is going to break-up with me. He didn’t smile when I saw him earlier.” “I bet I fail that test. It won’t matter how much I study, I’m going to fail.” “Oh man, that girl at work was sick. Now I’m going to sick. I’ll be sick and then I’ll miss my trip.” “What if my son doesn’t make the team? Or, what if he does make the team and then gets hurt?” “What if we get into a car accident?” “Are we going to have enough money to pay the bills next month?”

We fret. We stew over things that haven’t happened yet, expecting them to, anticipating the worst. We chase thoughts all day and all night trying to keep all of the “what-if’s” from being reality.

But, by worrying, we are making them our reality whether they actually occur or not. We spend all of our time running around in circles in our minds exhausting ourselves over things that may never happen.

Imagine if we didn’t worry. Maybe something bad does happen (it is a part of life, after all). What if when the bad times come, we are prepared for them—because instead of exhausting ourselves worrying and fretting, we have rested on God’s promises and we are prepared for battle with the help of Him?

Imagine it. Just, what if?

Do not be anxious about anything, but in everything by prayer and supplication with thanksgiving let your requests be made known to God. And the peace of God, which surpasses all understanding, will guard your hearts and your minds in Christ Jesus.

One thought on “What If by Lisa Bull”