When I received The Rescued, I wasn’t sure what to expect. Although Marta Perry’s first in the Keepers of the Promise series (The Forgiven) had been good, I found it difficult to follow. Would the same be true of The Rescued? From where I’m sitting? No. The storylines were much better and The Rescued was a solid read.

As with Book One, The Rescued has two storylines. The first storyline is of Judith Wegler, in current day, who is constantly playing the Peacemaker between her husband and his teenage brother (who she has practically raised from birth, due to a tragic fire that killed the rest of their family.) Judith is at the breaking point and finds herself doubting not only her peacemaking efforts, but her marriage. 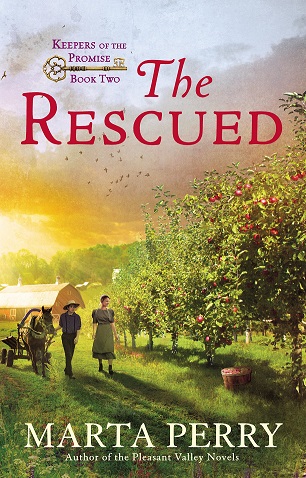 The second storyline tells about a 1950s Amish widow named Mattie Lapp. Mattie is struggling at a very pivotal point in Amish history: how long the Amish must attend Englisch schools. One of Mattie’s children is caught in the crosshairs of the debate, but at least she has her late husband’s cousin to lean on for support…and perhaps more.

I was given The Rescued in exchange for my honest review. Although other characters are mentioned from Book One, I do not think it is too distracting. The Rescued can easily be read as a stand-alone. I enjoyed both storylines (especially the one that took place in the 1950s. That particular storyline really seemed to capture the mood and heightened emotions and frenzy that must have been present then.) As was the case with Book One, I felt like The Rescued could have just as well been published as two, separate books. The very loose ties between the two storylines were weak and contrived. That being said, I still enjoyed both stories very much and found The Rescued to be a good, solid read.

Susan Ferrell and her husband make their home in the Atlanta Metro area. Although Susan struggles with chronic migraine headaches, she stays very busy as a stay-at-home mom to one very precocious little girl. While catching her breath, she feeds her Amishaholic tendencies by reading vast amounts of Amish literature! Susan is a book reviewer for Destination Amish