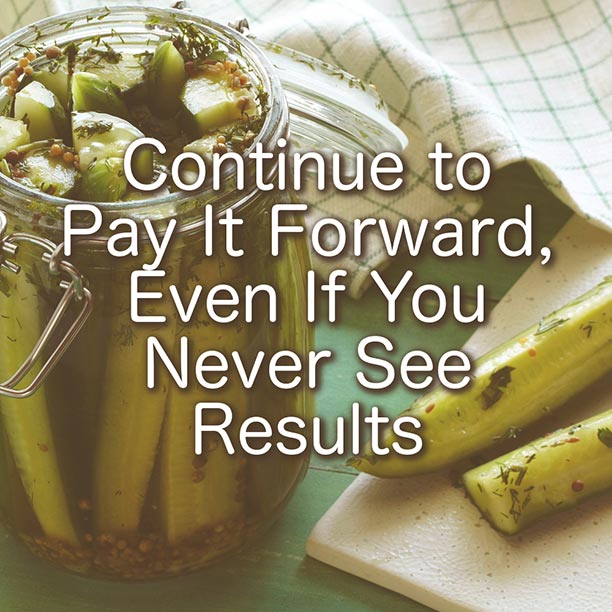 As an employment attorney and a career coach, I continue to be amazed and humbled by the fact that so many of my clients tell me that they apply the career advice I provide to a number of different aspects of their lives, including how they build and nurture their personal relationships. Perhaps this should not surprise me; although most of us need to work to earn money to survive (to acquire food, shelter, and other necessities), at the same time, most of us see our jobs as much more than that. Some people place a high value on the prestige associated with a position, and other people view their jobs as a measurement of self-worth or their ability to make a valuable contribution to society.

Consider this scenario I often discuss with my clients, related to the importance of continue to build relationships when looking for a job (even when faced with frustration about the fact that nothing seems to be producing results):

You’re sitting around the dinner table and someone asks you to pass the jar of pickles. You pick it up, try to open it, and can’t get the lid to budge. Your daughter taps the top of the jar with her fork a few times, but can’t open it, either. Finally, your husband tries hitting the lid with the flat edge of his knife—but before he can try to open it, your son grabs the jar and opens it with little effort.

So, who was responsible for opening the jar… your son? Well, he was the final link in the chain. More likely, though, it was the collective effort of everyone along the way that contributed to the end result.

Each person may have helped loosen the jar’s grip, despite seeing little or no progress. Even though most everyone’s efforts were deemed unsuccessful, it is not clear the desired result would have been achieved without the collective effort. The effort continued because someone likely felt that the lid was loosening, which would have provided everyone at the table with motivation to continue to try to open the jar despite no visible change in the looseness of the lid. Each time someone handled the jar and attempted to open it, they were weakening the lid’s seal, which they were unable to see. So, even though it may not have appeared that you were making progress—and as long as the jar was closed it was difficult to measure that progress—as the jar was passed around the table, you were indeed getting closer to the end goal.

Finding a great job takes a lot of work, and you may spend years getting to know people and offering to do favors for people, all without seeing very much in return. But, in the employment context, one small conversation, one interaction, or even one minute can change everything: Someone may resign or retire, or ta company may acquire money to expand its headcount. All of a sudden, your efforts will have paid off.

The same rationale that I use to assist others to achieve success in the workplace applies to how we should view our personal relationships. Sometimes we may put significant effort into trying to make a positive influence in someone’s life, but then stop trying to bring about that change due to an overwhelming sense of helplessness, because our work is not producing any visible results. The fact is, you just never know when your act of kindness will elicit a change, or when the person on the receiving end of your generosity will pay it forward to someone else—making a significant difference in that person’s life. That subsequent difference would not have been made without you starting the chain reaction.

The point is that just because you do not see an immediate return on your investment of goodwill doesn’t mean you aren’t making a meaningful and significant contribution toward the end result. We should all strive to be kind and generous to others. Take solace in the fact that even if you do not see an outright or immediate result, perhaps a warm smile, a call to a long-lost friend in need, or an unsolicited invitation to provide assistance might be just what is needed for someone to finally pop the lid off of their jar of dreams.

Lori B. Rassas is an SPHR-certified employment attorney with more than a decade of experience representing both employers and employees in all aspects of their employment. The second edition of her textbook, Employment Law: A Guide to Hiring, Managing, and Firing for Employers and Employees (Wolters Kluwer, 2nd ed. 2014) was published in December 2013, and she is working on a second book that will provide guidance to individuals about how to effectively navigate the modern job-search process. In 2013, Lori left her position at Columbia University and now has her own consulting business to handle employment matters. She is also a member of the adjunct faculty at Columbia University’s Mailman School of Public Health, Cornell University’s Scheinman Institute on Conflict Resolution, Fordham University’s School of Law, and Berkeley College. Lori is also a recognized expert on employment law and career issues, and was most recently quoted in a New York Times article about job references.