I am excited to have Kelly Irvin stopping by today to chat about her new book A Plain Love Song. Let’s all welcome Kelly to my blog! 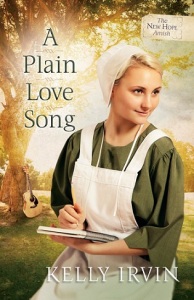 Adah Knepp wants nothing more than to make music. It’s all she’s ever desired–to sing and play the guitar and write her own songs. That’s a dream that will never come true in the confines of her strict Amish community. But then she meets Jackson Hart, and all of a sudden she finds the chance for a different kind of life. A real stage, a real guitar, and a real opportunity to sing her songs to a real audience!

But pursuing her dreams means turning her back on her family and community–and saying goodbye to Matthew, the gentle Amish farmer she can’t get out of her mind. Is it worth giving up the only home she’s ever known to pursue her dreams?

What inspired you to create this character?

I love listening to music. I can’t carry a tune in a bucket, but I love singing. Adah’s character began as a what if.  What if I loved singing and making music and my faith demanded that I ignore or stifle that passion? What if I longed to play an instrument and perform, but my faith said I shouldn’t call attention to myself in this way? What is God asking me to give up? What am I willing to sacrifice? That conversation in my head began the journey to A Plain Love Song. The other part involves setting. When I decided to pitch a spin-off series for Bliss Creek Amish and move some of my Kansas families to Missouri, I thought a lot about what I could do with this new setting. At the time, Missouri had one of the fastest growing Amish populations in the country. I took a trip to the state and traveled around gathering details and getting color. My husband and I spent two days in Branson and took in a couple of shows. It seemed the antithesis of the Plain lifestyle. How would an Amish girl feel about all the glitz and glitter? How would she feel about performing her music on a stage in front of packed house? Would it deter her from her dream or spur her on? What effect would it have on her faith?

How much fun was Jackson to develop as a character?

I think I’m half in love with Jackson. I know my editor is. When I’m writing my Amish characters I’m very careful about being respectful of Amish beliefs and practices so it’s nice to cut loose with an English character sometimes. Jackson’s young and handsome. He’s a cowboy and a musician. He writes songs. He’s passionate.  He’s flawed, but aren’t we all? What’s not to love? Having two strong men vie for Adah’s love really adds tremendous tension to the story. It can go either way and it’s all up to Adah to choose. I’d love to revisit Jackson in the future. You never know . . . .

How does Adah’s faith help her on this journey in making decisions, the good and the bad? What should readers learn from Adah’s experiences?

It’s important to recognize that Adah has a bedrock of faith to fall back on. She has a family of faith. We must all cultivate those two things. When we have decisions to make, if we make it a habit to pray, if we make it a habit to be in worship, if we have friends who share our faith, we know we’re not alone. If we make bad decisions, our Christian friends will hold us accountable and help us rectify the situation. If we’re accustomed to talking to God, we’ll remember to do it in our time of need as well as in the good times. Without any spoilers, let me just say Adah has to discover the answers for herself. No one can walk in those shoes for her. I’d love to make my children’s mistakes for them, but I know I can’t. God must sometimes feel the same way about his children. He always forgives and takes us back. We’re blessed that way.

The danger of putting music on a pedestal as a danger to distracting people from worshipping God?

Music is an integral part of the worship service where I attend church. I feel so close to our Heavenly Father when I’m singing, hands lifted, the faith band’s music loud around me. It’s when we lose sight of the goal—to use the gifts and talents He gives us to glorify him and spread his message—that’s when there’s a danger. This can happen with any gift or talent. What if I decided to use my writing talents to spread a message detrimental to the Christian faith? What if becoming a famous writer and making lots of money (not going to happen!) and being recognized everywhere became more important to me than spreading the message of hope and encouragement through Jesus Christ. That’s the danger. It’s not in the music itself or the writing itself, it’s in what we do with our gifts. The world encourages us to stand out, be competitive, be the best, be celebrities. The Amish faith says no, be humble, don’t call attention to yourself, be obedient, to do otherwise is prideful. I respect and understand that, but I believe music is a powerful instrument for bringing us closer to God. It’s his gift to us.

My agent initially suggested I try writing an Amish romance. I was resistant at first. Then I began to read about the Amish and do research. Forgiveness has been a big issue in my life in the past. I don’t find it easy. I found myself convicted by the way the Amish forgive, as evidenced in the Nickel Mine schoolhouse shootings. I asked myself if I could forgive someone for taking the life of my innocent daughter. I’m not so sure even to this day that I could do it. At the same time I was reading about the clash of modern life with the slower paced Amish lifestyle, including the increased frequency of buggy/motor vehicle accidents in places like Lancaster County. These two issues came together in my mind and I started writing my first Amish romance, To Love and to Cherish. My agent started shopping it around and sold it to Harvest House before I finished writing it.

Updates on your next projects?

I’m currently working on the second book in the Amish of Bee County series with HarperCollins Publishing. The first book, The Beekeeper’s Son, will debut in January 2015. I’m very excited about this series because it is set in a tiny Amish district in south Texas, the only Amish settlement in the state. It’s very different from what you typically see in settlements up north, partly because the climate and weather are so different. The theme of the first book centers around the difference between the worldly view of beauty and what God sees as beautiful. I can’t wait for it to release and see how readers react to it. 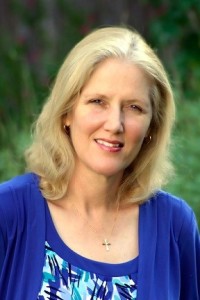 Kelly Irvin is the author of the Bliss Creek Amish series and the New Hope Amish series, both from Harvest House Publishing. She is currently working on The Beekeeper’s Son, the first book in The Amish of Bee County series, for Zondervan. She has also penned two inspirational romantic suspense novels, A Deadly Wilderness and No Child of Mine.

The Kansas native is a graduate of the University of Kansas School of Journalism. She has been writing nonfiction professionally for thirty years, including ten years as a newspaper reporter, mostly in Texas-Mexico border towns. She has worked in public relations for the City of San Antonio for twenty years. She is a member of American Christian Fiction Writers (ACFW) and serves as secretary of the local chapter, Alamo Christian Fiction Writers.

Kelly has been married to photographer Tim Irvin for twenty-six years. They have two young adult children, two cats, and a tank full of fish. In her spare time, she likes to write short stories and read books by her favorite authors.

3 thoughts on “Wednesday’s Wanderer: An Interview with Kelly Irvin!”