When I was working on the concept for my new series of Amish books from Berkley, I happened across some letters written by a young Amish man in the early years of World War II. I was fascinated, but also convinced that the idea wouldn’t fit into my stories. I write about contemporary Amish. I’ve never written historical fiction. It was impossible.

Fortunately or unfortunately, the idea wouldn’t go away, and as my imagination began to play with the concept, I realized that it wouldn’t leave me alone until I’d written about it! This was the seed that turned into my Keepers of the Promise series, with Book One, THE FORGIVEN, out now. In it,  a contemporary story entwines with a story from the main character’s family that happened during the 1940s. 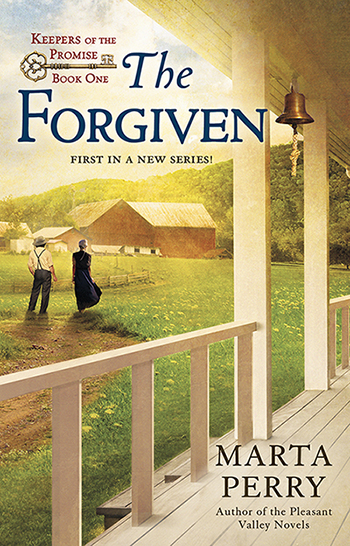 One of the problems I saw about writing something set in the past was that a few generations ago in rural America, the Amish weren’t that different from everyone else. To my surprise, that turned out to be an advantage. I’m old enough (Shh, don’t tell anyone!) to remember the ‘40s. One of my happiest adventures when I was a small child was visiting my aunt and uncle on the family farm. The farm was seven miles from the nearest village out a winding gravel road. No electricity, no running water, no inside toilets. My mother probably missed her modern appliances on those visits, but to a child, it was a fascinating time.

Uncle Harley took me to explore the cold cellar—a cave-like structure built into the side of a hill to keep perishable foods cold. Aunt Evelyn let me work the hand pump to draw water for cooking. And a bath meant heating up water on the wood stove and hoping I could get clean before the water got cold! At night, snuggled into a feather bed under  a handmade quilt, I watched shadows dancing on the walls from the flickering oil lamp until I drifted into dreams.

So when I began writing the 1940s sections of THE FORGIVEN, all I had to do was let my memories of those visits swim to the surface, until I could plainly see the farm where Anna lived—the clapboard house, barn, scattering of outbuildings, and the quiet peace that surrounded it.

But Anna didn’t live in peaceful times. For the Amish, the advent of the Second World War brought one of their most powerful religious beliefs into question. How does a pacifist live as a patriotic citizen in a time when the world is at war? For Anna, her family, and her beloved, the question was very real and very agonizing. And for Rebecca, looking back at her ancestor from today, the answers gave her the courage and faith to become another Keeper of the Promise.

A lifetime spent in rural Pennsylvania, where she still lives, and her own Pennsylvania Dutch roots led Marta Perry to write about the Plain People and their rich heritage in her current fiction series for Berkley Books and HQN Books. Marta is the author of over fifty books, with another eight books scheduled to be released over the next two years. The three-time Rita finalist has over six million copies of her books in print.

Marta is a member of RWA, Faith, Hope and Love, and Pennwriters. When she’s not writing, she and her husband enjoy traveling, gardening, and spending time with their six beautiful grandchildren.