Simple Cures All Around Us
By Adina Senft

When I travel to Lancaster County to research my Amish books, part of it includes slowing down and appreciating the simple things—even something as simple as a leisurely walk through a field. But when I began the Healing Grace trilogy, walking through a field became vitally important to my writing, because this is what my heroine, Sarah Yoder, does as part of her calling as a Dokterfraa, or herbal healer. 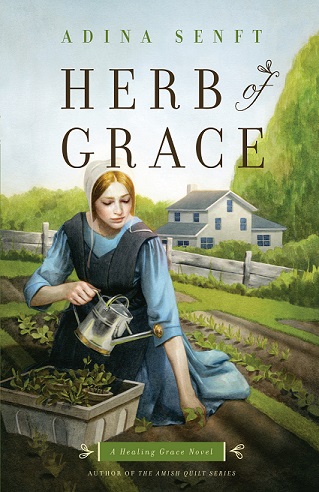 The Amish have a strong tradition in alternative medicine. While they go to the doctor when it’s necessary, and the church funds their visits, they prefer to look after themselves. This can mean going to the Englisch chiropractor, or it can mean visiting a local Grossmammi who keeps a pharmacy of bottled tablets and capsules in her front room, ordered from an herbal supply warehouse and sold to the community. This woman might also make fresh cures from plants as well, like Sarah Yoder, my fictional herbalist.

To prepare for writing these books, I took a six-week herbal medicine course and learned the difference between an infusion and a tincture, and between a cream and a salve. I read dozens of herbal references, and consulted with my instructors on the best cures for my story people. They got quite used to me sidling up in the garden and saying things like, “How would I treat a teenage boy who is allergic to ibuprofen?” (The answer: cups of Mormon tea, made from the stems of a certain bush that grows in Western deserts.)

I had other help while writing the books, too. My own chiropractor, who is also deeply interested in homeopathic medicine, told me a simple cure for gout, which my husband was forced to test when he got the condition. Of course, once he was cured, we made changes in our diet to make sure it didn’t come back! Here’s how the information played out in Herb of Grace:

Oran had stopped now, and was fiddling with the straps on the gray-sided buggy sitting next in line for repairs. “Medication ain’t so strange,” he muttered just loudly enough for [Sarah] to hear. “It’s putting that burden on the church for no reason I can’t abide. Stuff’s expensive.”

“No, it isn’t,” she chirped. “You can find it at the supermarket. Sometimes you can get it on sale for a dollar fifty-nine.” He huffed as if she were babbling nonsense, and turned to make his way through the big sliding door. “Black cherry juice did the trick, didn’t it, Simon?” She raised her voice just enough to carry through the door. “A couple of glasses a day, and Jacob was right as rain in a week. It dissolves what they call uric acid, you see, that forms crystals in the toes.”

Learning how the Amish look after their own has opened my eyes to the simple cures all around me—reminding me of God’s constant care and provision for us, even in our own backyards. 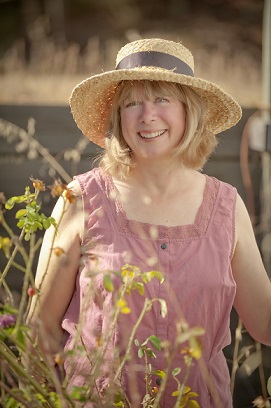 Adina Senft grew up in a plain house church, where she was often asked by outsiders if she was Amish (the answer was no), she made her own clothes, and she perfected the art of the French braid. She holds an M.F.A. in Writing Popular Fiction from Seton Hill University in Pennsylvania, where she teaches as adjunct faculty.

Writing as Shelley Bates, she was the winner of RWA’s RITA Award for Best Inspirational Novel in 2005, a finalist for that award in 2006, and, writing as Shelley Adina, was a Christy Award finalist in 2009. Three of her books have shortlisted for the American Christian Fiction Writers’ Carol Award for book of the year. Of her fiction, publisher and industry blogger W. Terry Whalin has said, “Readers will be lost in the vivid world that [she] paints with incredible detail and masterful storytelling.”

A transplanted Canadian, Adina returns there annually to have her accent calibrated. Between books, she enjoys traveling with her husband, playing the piano and Celtic harp, and spoiling her flock of rescued chickens. These days, she makes period costumes and only puts up her hair for historical events and fun.