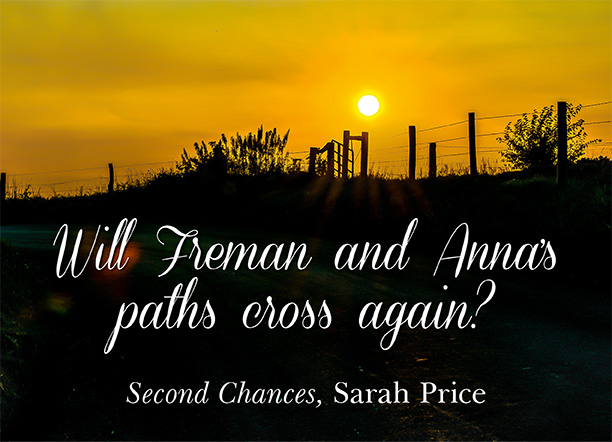 He stood by the side of the buggy, the door already open as he waited for her. Without a word, he reached for her hand and helped her step into the buggy. When he followed, it jiggled under his weight, and she steadied herself as she sat on the small seat. “It’s getting cold,” he said and reached behind the seat for a blanket. With great tenderness, he covered her lap and smiled at her. “Better?” She nodded. “Now, tell me,” he said as he depressed the foot brake and gave the reins a slight slap upon the horse’s backside. The buggy lurched forward and headed down the road. “What has you looking so perplexed, my sweet Anna?” Words escaped her, and she remained mute at his side. Slowly, his expression changed. She wondered if he suspected what she was going to say. If he did, surely he knew how heavy her heart felt. “Anna?”

Taking a deep breath, she shut her eyes, saying a quick prayer to God for the strength to speak what weighed so heavily on her mind. There was no easy way to tell him, so she chose to be candid instead of softening her words. “Freman, I cannot marry you in November.”

She waited for his response. For a moment, he remained silent. She felt tears welling up in her eyes and blinked rapidly to stop them from falling. She couldn’t imagine his devastation at the news. After so many long buggy rides home from the youth singings on Sunday evenings, their compatibility more than apparent to both of them, it had been only natural that they would marry. She wanted to marry him. But when she informed Lydia and asked how best to tell her daed, she quickly learned that her admiration for Freman was not shared by others. How could she defy the advice of her mother’s best friend or the wishes of her own father?

He focused on the reins of the horse and seemed to contemplate her proclamation. “I see,” he finally said. “I know you think you must wait until you turn eighteen, Anna. So, if we must wait until spring . . . ” He let the sentence linger between them. “Freman, spring isn’t the answer.” “I know it’s unusual, but more young couples are doing that these days,” he responded. When he glanced at her, she looked away. “It’s not that I cannot marry you in the spring,” she whispered. “It’s that I cannot marry you ever.”

Want to read more? I hope so!! 😀 Second Chances is available now on |Amazon|CBD|B&N|BAM|