This season, I decided to make my “gifts” be to those in need. Let’s be serious…there are many more people in need than most people. I believe it is better to give than to receive. I wish more people felt that way (don’t you?).

So here goes Day One of my Twelve Days of Giving… 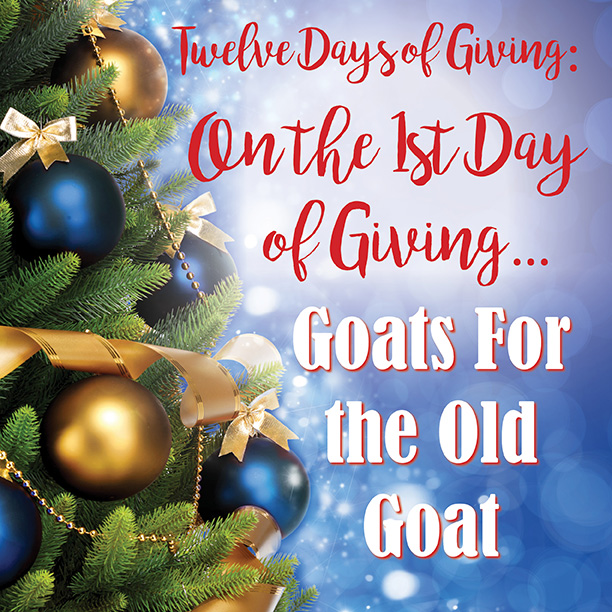 How about giving a to returning former slaves and people in South Sudan because of the ongoing civil conflict? One of the reasons that I like this charity is that they are teaching the people how to fish, rather than just giving them a fish.

$60 will purchase a goat with vaccinations and food for one year. The families in Southern Sudan use the goat for milk and breeding. A goat will usually have two kids a year and, by selling those kids, families can afford to send two children to school for one academic year.

Many years ago, I ran a charity, Focus America, and traveled around the country helping poor communities. The most exciting project that I orchestrated was helping a mission in Pikes County, Kentucky build gardens, chicken coops, and pig pens. The idea was that they could grow their own food. It worked!

The other thing I like about this charity is that they spell out how the donation helps and guarantee that any money donated is spent on the people in need and not on overhead. They also focus on medical supplies, education, and sustainability.

Anyway, since this charity is #1 on my list, I have personally donated an entire year of goats…one a month for twelve months. You don’t have to do that. You can consider a simple $5 donation or just donate one goat. Maybe you could get six friends to contribute $5 and go in on one goat.

As bad as we have it here (now, past, future), it’s nothing like these people in Southern Sudan who have truly suffered…from murders to slavery to starvation. Anyway, this is my pick for The 1st Day of Giving and I give this gift in honor of my husband, Marc Schumacher, who had taught many young children/teenagers/adults how to fish instead of just tossing them a fish. ♥