The more time that I spend with my Amish friends, the more disturbed I am by the amount of tragedy that befalls these gentle people. Yesterday, while I was making cookies at the Lapp farm with Anna, I had asked her about her weekend and if she had nice Sunday. It was not a church Sunday so they had gone visiting to a young man (40s) who had just lost his wife in an accident. The previous weekend, when I was having breakfast with Lizzie and her mother, Mary, they had also mentioned this same accident. I was too familiar with the story but Anna told me more details. My heart just sank in my chest.

The couple had returned from a funeral and it had started to rain. Having just cut the hay to dry a few days earlier, they decided to go into the fields to bale as much of it as they could so that it wasn’t ruined. While moving the mules along the rows of hay, the mules started to spook and the wife lunged forward to grab the reins. She slipped because of the rain and mud, fell, and landed under the baling machine.

Her 22 year old son was with her and witnessed the entire scene. Besides her husband, she left behind six children, the youngest just 8 years old. 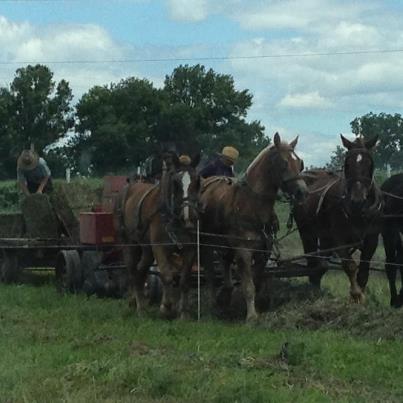 Earlier in the day, I had taken this picture of two brothers baling hay. It’s so magical to watch the mules and the equipment, so peaceful and beautiful. It makes me long to leave it all behind and move out here permanently (to which my own children would protest loudly, I’m sure). How could something so natural and harmless become a killing machine?

Last night, Katie S. and I sat in the breezeway, discussing the situation. She told me about the woman and how she was the most pleasant person. “She could walk into a room and just light it up,” Katie said. “There was never a more loving, fun, and warm person.” She clicked her tongue three times while shaking her head.

Why do bad things happen to good people? Why do senseless accidents happen like this? Their original intention was to save the hay. Instead, an accident ruined their lives. It just doesn’t make sense.

Anna had told me that the husband had seemed fine at the funeral but, last Sunday, he was in shock. The finality of the situation had left him stunned and almost unable to function. His oldest daughter is not faring well and, rumor has it, she is under special care. “But that’s just Amish gossip,” Katie S. admitted with a wave of her hand. “That always flows after such events.”

I asked Katie S. what happens now to the man and his family. The community, church district, and family are taking care of the man and his children. Food is being brought over and great care will be taken to insure that the youngest children have a support system. Within a year, maybe two, he will most likely remarry. “That’s just our way,” Katie S. said. “But it’s never the same.”

My heart goes out to this family.

12 thoughts on “Tragedy in Leola, PA”