Has anyone ever had a courtship between two brothers at the same time!? I don’t think many of us can say that we have.

Have you ever been told that you have one month to decide on a guy that you think you would want to marry?

Being the only daughter running her father’s shop, and in her thirties, what most Amish communities consider an old maide, Ellen Beachey has yet to marry, though she had courted Neziah Shetler. In her defense, her parents are older and have had some things happen that Ellen felt she needed to help them through.

Summer is slowly coming to a close bringing forth the fall season. Simeon Shelter, Ellen’s next door neighbor, finds himself in need of help along the road, which happens to be the same road that Ellen uses to get to her father’s shop. Ellen is on her way to work and sees Simeon so she stops to help him.

After helping him, Simeon offers Ellen a lift to work and also talks to her about his proposal.

Simeon Shetler’s proposal is for Ellen to choose between his only two sons; adventurous, golden-hair Micah or older and more serious, but gentle natured Neziah, who is caring for two motherless sons of his own. She’s been given one month to get to know both brothers before she has to give her answer of which one she would like to court and then marry.

Will Ellen be able to listen to heart and not the voices of those around her?

And the exciting question of all, which one will she choose?! 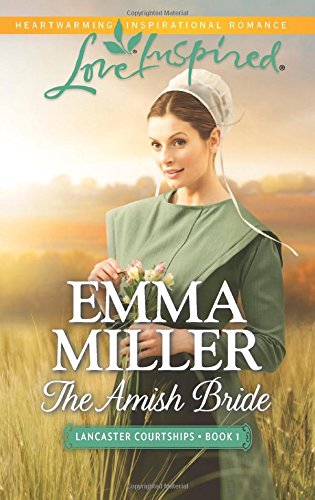 What an exciting, interesting, and different spin on Amish romance that Emma Miller has written for readers.

She has added enough detail to make her book come together and flow fluently so that you are not missing anything as you read The Amish Bride.

I look forward to reading book two in Lancaster Courtships, The Amish Mother by Rebecca Kertz, releasing September 15, and then the last book The Amish Midwife by Patricia Davids, releasing October 20, to finish out the series.

(Simeon and Neziah Shetler’s names are how the author had them in her book.)

I live in my small hometown of Mercersburg,Pennsylvania, which is famous for being the home of our 15th President, James Buchanan. I am the wife of Buster and have one son who will be graduating from high school this year.

In February of 2010, I was terminated from my job and by March I had picked up my first Amish fiction book. I have been hooked ever since!

Also in late spring of 2011, I started a Facebook group and then a few months later, I started my own Facebook page that I run, Amish Book Previews. I created this so I can share new information on Amish fiction books that have been released. I’d love it if you’d stop by my page!