During the week, I stopped at the Lapp farm during their day of meat canning. Two days before, they had sent a cow to the butcher and, on Wednesday morning, James Lapp had gone with the children to pick up the meat. I arrived around 11am and everyone one was in the utility room which is directly off of the kitchen. Priscilla, Lavina, James Junior, and Little Katie were all helping their mamm with the canning.

Little Katie (9) decided to adopt me as her protege, for which I was thankful. She set me right to work. I took all of the ground meat and packed it into the jars then Katie would top it with salt and pepper. We had a production line going for a while. After we had a lot of jars lined up, we would wipe the mouth of the jars then put the lids on them.

Anna had a wonderful brick stove that was fired up with wood and boiling about twenty or so jars already. I was immediately envious of the stove. It was the perfect stove for cooking in the summer as it would not heat up the house. I asked to take a photo so that I can show my husband and, hopefully, we can built one outside. 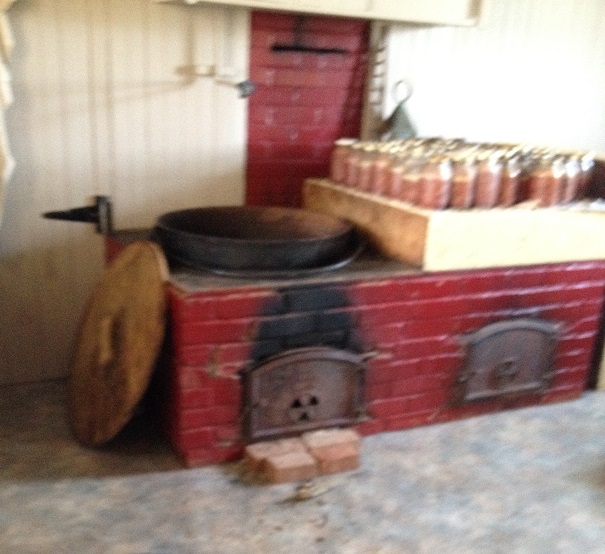 The fire was going out and James Junior (5) went outside to get more wood…without being asked. When he brought in a large limb, his mother very gently told him it was too big. “Gonna chop it,” he said with determination in his voice. Outside he went and about five minutes later, we heard a chainsaw noise.

Anna looked up, “Did he get the saw, now?” she said. I love the way they speak…everything sounds like a song. She glanced out the door and, indeed, little James Junior had a table saw in his hands. “Oh my,” she said to herself. “That could take off fingers.” She opened the door and stood by, watching him. But not once did she try to do it for him. She just supervised. I think that’s one of the reason that the children have such confidence. I would never have let my 5 year old handle a portable table saw. When my son used a hammer at that age, he wound up smacking it into his forehead and almost needed stitches! I think he still has a scar.

Little James brought in his sticks and when he set them down on the floor, bugs came out. Dozens of bugs. Again, Anna just told him to take the sticks outside and get rid of the bugs. No yelling, no screaming, no anger. Just gentle guidance. The older girls swept up the bugs and tossed them outside and Ivan, the older boy who had just arrived home from helping his uncle milk cows, hurried to get their pet duck to eat the bugs.

I liked working with Little Katie. We talked and I asked her about school. Several times, I made her laugh with my funny stories about my own children. The older girls were so quiet but Little Katie had no problem opening up to me and becoming fast friends with an Englischer. I told Anna that I’d trade her my daughter for Little Katie and everyone laughed.  While we worked, there was a lot of sharing that occurred. There were stories that were told about other cannings, there was praise for a job well done for the little ones (and me!). The older girls made jokes about crying over chopping onions. Anna shared instruction and recipes with the children. I realized that there was an awful lot of learning going on through this process. But, more than that, it was a bonding time between mother and children.

When James (the husband) came in, he would carrying the heavy boxes of meat, pause to recognize his son’s efforts, and share a quiet comment with his wife.

What amazed me the most, however, was the rhythm of the activity. No one complained, no one argued, no one really needed instructions (except me). There was many positive comments back and forth among the children to each other as well as among the mother to the children. Despite having to can a year’s worth of meat, there was no pressure among the workers. By the end of the day, they would have canned approximately 80-100 quarts of meat!  Maybe more…(I eventually left after dinner time and I know they had plenty of meatballs to can so I didn’t see the final count…I’m estimating).  Some of those cans would be shared with other family, traded for canned vegetables or used as birthday gifts to the elderly who don’t have time to can (or the access to fresh meat and vegetables).

It was a great day and a wonderful learning experience. I cannot thank Anna and her family enough for their patience…and acceptance of my curiosity at the process!