Something magical happened this week. My husband and I traveled to Lancaster County to deliver some of our summer ponies and horses that we don’t need until next year. Rather than transport them to our farm in Florida, we decided to board them in PA. Easier drive, safer for people and horses in transit.

We dropped them off at 2pm then went about our business of picking up repaired carriage shafts and new buggy wheels. When we returned to finalize the boarding agreement, the ponies were outside in a paddock and being ridden by six very active and knowledgeable Amish children. No saddles. No bridles. They just popped on top of those ponies like they were jumping up a staircase!

It was so very special. Even my husband had tears in his eyes. We watched those children jump up and ride our ponies, including one that had never been ridden before! They knew exactly what to do! The girls had on pants under their dresses. The boys were like little cowboys. One of the small horses named Harold didn’t like Princess (pony) being so close to him. So, being a horse, Harold bucked and kicked, kicking the pony three times. All I saw was an Amish girl in a bright turquoise dress holding on for dear life and doing a darn good job of it! I held my breath and waited but Barbs did not fall off. She held on like a trooper and I nicknamed her “lil cowgirl”. 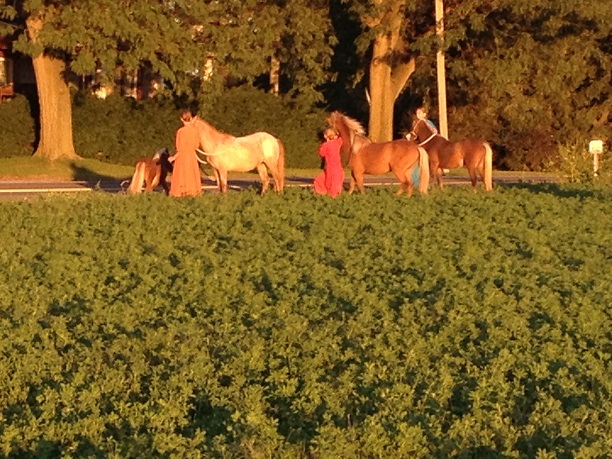 The other gal, Laura, was just darling. She was up on ponies, galloping down the lane. She returned and switched ponies. When I asked if I could take her photo, she said, “Of course! I don’t mind!” (visit my FB page to see it…http://www.facebook.com/fansofsarahprice). Her younger brother, Michael was too small to ride. So he adopted our baby pony. He groomed and groomed that pony until it shone.

When the sun was setting, those Amish children rode those ponies…without saddles and without bridles…across the field to their cousin’s horse farm. The old black Lab dog followed in the field, carefully crossing the busy road after the children.

It was a beautiful moment, so special to see these children play with the ponies. I wish I could have shared it with everyone. Hopefully, I just did…