Not only do I believe in love at first sight, I believe that it might just be the strongest love out there. Maybe that’s why I enjoy writing romance stories so much.

Not quite a year ago, I fell in love. Hard. Fast. Dangerous.

Obviously I couldn’t tell my husband. I knew he’d be very upset. Besides, I also knew that it would be an unrequited love that would never go beyond my secret longings.

Maybe my strange love affair started years before I even met her. Marc had given me a black baby horse during our wedding ceremony and oh! how I loved Undee. But, at the time, I worked full-time (blah) and it was hard to ride her. Whenever I went to the barn, people stopped and talked to me or the riding rings were crowded. Some of the (now former) staff were…a bit judgmental so I felt conspicuous riding him. Especially because he was so young and I’m not exactly a top-notch cowgirl.

And then I got cancer.

That put me out of commission for almost two years so Cat took over Undee and eventually found mustangs and Undee got snatched up into the schooling program.

Bye bye wedding present and a small piece of my heart.

So the day that the girls picked up their 2017 mustangs and I saw this photo, I fell immediately in love. 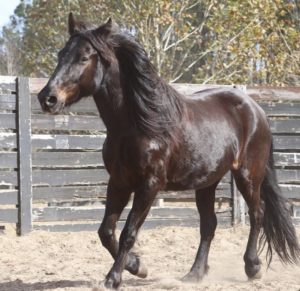 I admit it. I fall for black horses. And this one just took my breath away. But I knew it was not meant to be. After all, my daughter’s best friend, Sam, was training Malibu and probably going to keep her so I didn’t breathe a hint of my love for this amazing horse. Instead, I stayed in the shadows, watching the progress she made with this horse and silently cheered them both on.

One day, Cat came to me and made a comment that Sam was concerned that Malibu wasn’t ready to be sold. She had been a difficult horse to train and understandably so. She was captured in the wild when she as about a year old. It was a horrible capture and then she was thrown into short-term holding for six long years. No one adopted her and she eventually became a three-striker (meaning one more strike and she’d have gone to slaughter).

The problem, however, was that Sam couldn’t keep her. Cat’s words were music to my ears.

I’m sure Cat thought I was nuts—which wouldn’t be the first time.

Fast forward a few months. I managed to adopt Malibu and we’ve had a rough start of it. Sam did a great job training her; that wasn’t the problem. The problem was and remains me.

Malibu seems to be a one-person-horse and I haven’t been so great about being that person. I have deadlines to meet, obligations at home, and trips that take me out of the state for a while. Poor Malibu had a person (Sam), then had a new person (me), than I disappeared and days later returned and then Sam returned and….

Well, you can clearly see the problem.

Six years in a short-term holding pen is almost like being in prison. For those long years, Malibu wasn’t allowed to be a horse. She didn’t have the chance to run in a field, kick up her heels, nicker in the wind, or feel the love of a person. She has to be taught how to love and, even more importantly, how to trust.

Shortly after we arrived here, Malibu cut her leg. It was basically gross and, thankfully, our neighbor Super Sue helped tend to it and then showed me what to do. Every morning I went out there and tended to Malibu. Slowly, something changed. I noticed it almost right away. I began feeding her in the evenings and letting her out in the morning. Slowly, Malibu began to trust me. I could even touch her ear, the one that she hates anyone touching.

Today, she jumped out of her pasture and ran to another one. She wanted to be with her buddies (but we keep her separated so that we can catch her…for now). Cat came inside and called for Sam to help her catch Malibu. I hurried out and slowly I walked up to her. I think all of us were surprised that she didn’t fly across the pasture, tail and mane waving as we stared at her backside. Instead, she let me put a lead around her neck and take her to the round pen where I worked her for a few minutes.

Nothing is easy in this world, especially gaining the trust and love of any living creature…human or animal. I cannot explain why I fell in love with this amazing mustang from one picture. I cannot describe how excited I was when I learned Sam wasn’t going to keep her. And I cannot begin to recount how hard my heart beat on the night that I bid on her in Springfield, Massachusetts in order to ensure that she came home with me to her forever home.

No, it’s not easy. But like anything else, if you want something bad enough, you have to work at it. Life does not hand out short-cuts. By staying true to yourself and persevering, I believe you can do anything. You cannot rush success. You cannot buy success.

Too many people think that success is a given, a natural extension of desire. What they don’t realize is that success is not (nor should it be) the end goal, but it should be the journey that takes you there. People forget that and, in their rush to reach their ideal of success (which usually includes McMansions, jetsetting the world, fancy cars, hobnobbing with A-listers, etc.), they forget about the journey and miss out on everything in between point A and point Z. And a lot of time in their rush to propel themselves to the top of their company, game, or career, they step on so many people along the way that they leave a long line of carnage behind them.

No, those people will never truly be successful.

And I’ll tell you why.

You see, success is much more that just jumping on Malibu and yee-hawing across an open field while waving my cowboy hat. Success is a gentle pat, a good grooming, a slow walk down a dusty lane while the sun sets. Over time, all of these things will cement that bond that I’m developing with Malibu. And, hopefully, in that time, she will forget about those horrible six long years in short-term holding and nicker when she sees me coming to fetch her with a big carrot in hand and my heart full of love to shower on her.