On October 31st, my book Belle: An Amish Adaptation of Beauty and the Beast dropped. It was a day of celebration.

Or, rather, it should have been.

Cat and Sam left early, well before the sun rise, to go to Disney. Happy Halloween, girls. It’s not my favorite holiday (if you can call it that) by any stretch of the imagination. You’ll learn more about my reasons for hating Halloween in my upcoming book, Broken Vessel. Anyway, I had to do some work on things at home such as meet with the heat repair man, work on some legal paperwork, stop at the city office to ask a question, and go to the bank. After all of that was finished, I was treating myself to my one favorite thing in the world: a manicure and pedicure.

It was sorely needed after the week+ of building the barn.

The only problem was that it took almost FOUR HOURS.

Now, when you have farm animals, going away for a day is not as simple as feeding horses and driving off. Both Sam and Cat were counting on me to bring in the horses and feed them dinner.

Granted, they had most everything set up for me (water, grain, hay). But I needed to bring in eleven horses, make certain I got them in the correct stalls, and give my own three fuzzies their supplements.

Well, by the time I finally drove down the lane to our farm, the sun had already set. It was cold and I was wearing sandals and a sundress. But rather than go change, I immediately went to the horses.

The first horse, Lynx (Sam’s mustang from the 2016 competition and, btw, the champion of the Extreme Mustang Makeover, Youth Division for Massachusetts) decided to run away. He ran and had a grand ole time with me chasing after him trying to catch him without him stepping on my newly painted toes. Once he was corralled (and that was NOT easy), I brought in my own baby, Essie, and Sir Ritz of a Cracker (my mini-horse). Crackers decided to take off and say hello to the ladies in the mare’s paddock.

Nothing was going well.

After I captured him, I brought in the mares which, thankfully, wasn’t disasterous. And then I brought in Sam’s huge draft mares, totally petrified that they might crush me. These horses are HUGE. 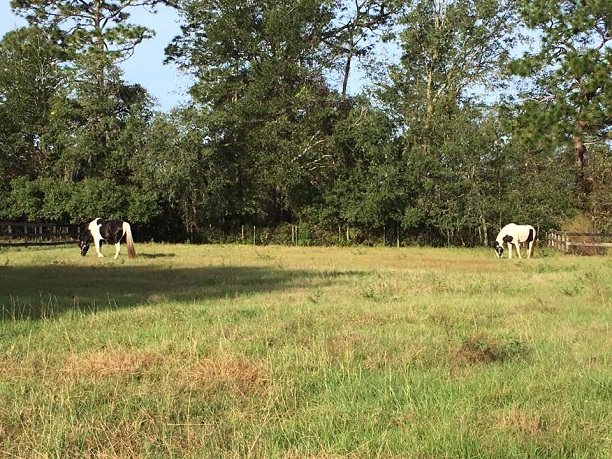 Two hours later, the girls returned from Disney. I was already in bed, reading, when Cat called me. She was most unhappy.

“WHAT DID YOU DO TO MINNIE?”

I had to think. What did I do to Minnie? I captured her from the paddock and led her into the stall. Was this a trick question?

“You put her in the wrong stall, Mom! She had no food for two hours. I can’t even leave you with my horses for one day and you messed it up!”

In my world, big deal. I can go entire days without food. What’s two hours? But what really bothered me was the fact that Cat did not have her horses stalled in a logical order. Instead of having her horses in a line, she had them in a box: two across from each other. That just didn’t make sense to me.

“How was I supposed to know you had them in weird stalls?” I argued.

She hung up on me.

Part of me was laughing. She sounded like a mother, fretting over her toddlers. The other part of me was irritated. It was almost ten at night, I wanted to sleep, and the horse was just fine!

Figuring it was an apology, I answered the phone with a hesitant “What?”

Gone was the hostility in her voice. Now she was sounding contrite. I felt better already. “Yes?”

“There’s a problem out here.”

Immediately I thought of wild boars attacking the ducks, coyotes taking down little Crackers, martians landing in the far paddock. “What happened?”

“There…um…seems to be an explosion in the water line and…well…water is gushing everywhere and…yeah. It’s bad.”

To make a long story short, one of her rescue mustangs must have kicked the water line in a far paddock (basically the same thing as a martian, I suppose) and the water from the line was pouring out everywhere. Now, mind you, it’s late at night, dark as all get out, and cold. Really cold. Somehow I found my lantern and, with a blanket wrapped around me, I tried to turn off the well pump. No such luck. It took me almost an hour to figure it out (and only with the help of my neighbor Sue). In the meantime, Cat was drenched, Sam was frowning, and we no longer had water in the house.

There’s always something going on at the farm. It’s a full-time job running this place. I cannot imagine how the Amish do it. They don’t have the luxury of breaker boxes and cell phones, high beams and electric pumps. I give them so much credit for being so strong and smart. I continually find myself amazed at how little I know about life off the grid…and I’m not even really off the grid at all!

BTW, first thing in the morning, I sent Marc a photo of the broken pipe and, with his guidance, I managed to fix it all on my own! I am so proud of the fact that I fixed it rather than call a plumber. Now, let’s keep our fingers crossed that the horses keep their hooves on the ground and not kick it again!

One thought on “Life Off the Grid: Sarah Price’s Take on a Not-Quite Amish Farm Life Part Two”