Chapter One: Pastures of Faith (The Amish of Lancaster) 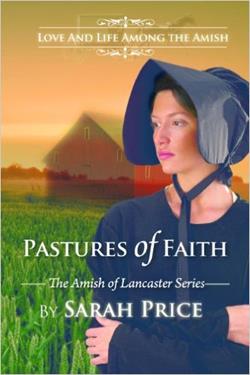 Daniel stood in the middle of the pasture, his battered straw hat resting askew on top of head. The midday sun was hot overhead, despite it only being early May. The grass was already halfway to his knees and he could hear the crickets chirping, hidden in their burrows among the twigs and leftover leaves from last autumn. There wasn’t a cloud in the sky. Instead, the sun gleamed against a brilliant blue backdrop. The depths of the blue were richer than any he could remember seeing in the past. It was truly a glorious day and a testament to the good Lord above.

Behind him, his father’s cows grazed. He could hear their movements, slow and sluggish, punctuated by mooing and heavy breathing. When he turned to watch them, he couldn’t help but smile. Most of the cows lingered near the large water hole at the bottom of the valley. With the unexpected heat, it had evaporated to not much more than a muddy patch of water but the cows loved to linger near it and, occasionally, wallow in the mud to cool off. They were predictable in their habits, he thought. Just like people.

His eyes traveled beyond the water toward his father’s farm. The white barn needed a fresh coat of paint, something his daed, Jonas, was sure to assign to him in the upcoming weeks. It was a large, two-story barn with the cows stationed at the lower level and the hay, grain, and equipment at the second level housing. There was a ladder to the second floor from the dairy section but there was also a large double door that led to the driveway, allowing easy access to the field machinery.

Next to the barn, closest to the lane, was the mule shed. It wasn’t as elaborate as the other outbuildings. In truth, it was more of a simple running-shed to protect them from the elements. The paint was peeling and there were shingles missing from the roof. But the mules had their own paddock to seek respite after a long day’s work. They often hung their head over the fencing, watching the cows meander through the rolling green pastures.

On the other side of the barn was the horse stable and farmhouse. The farmhouse was elongated since it was actually two houses in one. In just a few years, his parents would move from the larger section of the house to the back partition, the grossdaadihaus, so that their eldest son, Jonas Jr., and his growing family could benefit from more living space.

Daniel and his two younger brothers, David and Samuel, were the last of Katie and Jonas Lapps’ children living at home. Their seven older brothers and sisters had already married and moved to their own farms and houses to raise their families, except for their eldest brother, Jonas Jr. Some of his siblings lived close by while others lived a bit further away. Yet, as a true testimony to their upbringing, all of the children had remained faithful to the Amish faith, despite some bumps along the way.

Daniel knew that, in time, when he married, his two younger brothers would move with their parents to the back house. His brothers wouldn’t mind the smaller living quarters. The main house already seemed lonelier and quieter since both sister Sylvia and brother Steve married the previous year. It was much different living in a house without the noise and commotion of all of his siblings. But Daniel knew that there was a season for all stages of life. Nothing ever stayed the same.

At twenty-one, Daniel also knew the expectation from his family and church community. It wasn’t hard to figure out since those expectations were the same for all children in every Amish household. They were eager for Daniel to settle down from his rumspringa and accept the Lord Jesus as his savior through holy baptism. That was the precursor to establishing his own household with wife and children. But Daniel wasn’t ready for settling down. Not just yet.

Despite being in the midst of his running around years, Daniel avoided the Sunday singings by choice rather than design. He wasn’t interested in courting any girl, despite his suspicion that several of the single girls in the church community wouldn’t mind an invitation to ride in his courting buggy, a hand-me-down from his brothers. Jonas Junior, Emanuel, and Steve had all used the open-top buggy when they had begun courting their intended wives. But Daniel was reluctant. It wasn’t that Daniel didn’t like those girls. They came from good families and had every characteristic of being a fine Amish wife one day. He even suspected that his older sister, Sylvia’s friend, Millie, would have liked him to attend more singings, perhaps even offer her a ride home. He had done that once or twice in the past but that was the extent of his involvement with getting serious.

Daniel was happiest living life on his own. He favored staying with his parents, working the fields, and enjoying the peace and solitude of independence. Every morning and every evening, Daniel worked alongside his father and younger brothers, milking the cows and tending to the other animals. It was his favorite time of the day as it gave him time to reflect on life and the Lord without worry of interruptions from anyone.

For a moment, as he stared around him, he felt waves of peace flood throughout his body. God was indeed miraculously good, he thought, to give us this farm and this life. He was happy and that was all that God wanted, he thought. Happiness and obedience to His word. Daniel took a deep breath and started walking down valley toward his parents’ farm. On a farm in May, there were plenty of chores to tend to and Daniel was more than happy to accept the challenge.

Want to read more? I hope so!! ? Pastures of Faith is $1.99 for an eBook on Amazon or FREE if you have Kindle Unlimited!

One thought on “An Excerpt from Pastures of Faith”