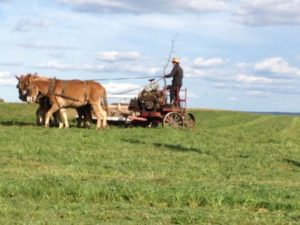 During the course of the early afternoon, as she unpacked her few belongings, the rattle of a buggy driving along the road whispered in through the open windows. The first time she heard it, Shana hurried to the nearest window and, pushing the curtains back, looked out, too late to catch anything more than a glimpse of the black boxed buggy and the majestic horse pulling it over the hill. The second time, having missed the buggy, she noticed a lone man walking behind a mule-operated machine in the fields.

The machine moved across the field of corn, a narrow path dropping behind as the corn stalks collapsed to the power of the plow. While she watched, the young man’s straw hat, worn and tattered, blew off his head, revealing a tousled set of brunette curls, and fluttered to the ground. Quickly, the man pulled back on the mule’s reins. When the mule stopped, the man walked over to pick up his hat. For a second, he held the hat in his hand, glancing over the field of waving corn. Then, his hesitation over, he slid the hat back onto his head, returned to the mule, slapped the reins on its back, and continued harvesting the corn.

Shana spent the rest of the afternoon driving along the winding roads, acquainting herself with her new surroundings, more from relaxed boredom than from pure interest. The massive farms impressed her. Each was very similar: Large white buildings with pastures where Holstein cows were grazing. Yet, at the same time, very individualistic: From the pretty flowers that surrounded the mailboxes and the dogs lounging on the front porches to the clotheslines flapping in the wind, most adorned with brightly colored clothing, all spoke of the different personalities living within each dwelling.

In town, Shana parked her car along the main street. Horses pulling the black Amish buggies trudged along the streets amidst the hundreds of tourists, bending their necks to get a quick glance at the people inside. Shana fought her way across the street and into a small bookstore. She nosed through several books and, after much deliberation, she stood in line to purchase the latest edition of a book about Amish society.

She wandered through the small town, pausing at an antique furniture restoration store to admire the tall, cherry oak armoire in the window. A loud car horn blasted behind her and, startled, she turned in time to see a battered, green pick-up speed past a buggy. The driver in the pick-up shook his clenched fist out the window and his passenger tossed a burning cigarette at the horse. Then, the truck was gone and the frightened horse, quickly steadied under the calm hand of its driver, continued patiently down the road.

Her last stop before returning to the Lapp’s farm was the local grocery store. Although she would spend most of her time in the restaurant, she knew she’d want a small supply of food in the house for her days off. The store reminded her of an old general store. Everything from hats and shoes to flour and sugar lined the aisles. In the back, dried herbs hung over the glass cases filled with fresh smoked Pennsylvania Dutch ham and sausages. And, at the register, as she waited in line behind an older woman in a floral polyester dress, she noticed that the cashier greeted most of the people with a personal hello and a warm smile.

When she returned to the farm, the cows stood noisily in the barn and in the outside paddock near her new home. Shana stood by her car, staring across the paddock at the luscious corn fields, rich and green in color. The air, while ripe from the manure, was not necessarily unpleasant. She shifted the grocery bag in her arms, glancing around at the now quiet barn. She could see a bright light burning in what she imagined was the kitchen window of the farm. But she saw no activity from within.

Behind her small house in a shed-like barn, a muffled neigh caught her attention. Squinting, she could vaguely see several large mules eating out of the troughs. In the background, two mules nipped at each other and jumped in a semi-playful manner. Curious, Shana walked toward them. The closest mule lifted its massive head and stared at her, its rabbit-like ears twitching nervously. Shana smiled as she dared to reach out and scratch the mule’s forehead. “You’re a big fella, aren’t you?” she murmured.

“You like the animals then?” a low voice said from the shadows behind her.

Startled, Shana whirled around, dropping the grocery bag. The carton of eggs fell out, spilling onto the dirt floor, several of them breaking. Shana knelt to examine the damage. The young man set his pitch fork aside and quickly bent down to assist in the assessment. Shana glanced at him and smiled. “Only three.”

He tilted back the straw hat perched atop his forehead as he met her gaze. “Sorry about frightening you like that.”

They both stood, each quickly surveying the other. Shana wondered if the man before her, with thick curly brown hair and sparkling blue eyes, had been the same man she had watched briefly in the field. His face reminded her of a child, soft and innocent, although the twinkle in his eyes whispered otherwise. His voice, soft and even-toned, had a slight German accent, spoken in the same dialectical slang as Jonas Lapp. She knew at once that he was certainly Jonas’ son.

“I hadn’t seen you standing there,” she said apologetically. While he was short like Jonas, he still towered over her. She couldn’t tell how old he was, possibly eighteen, maybe older.

He plucked a piece of hay from a nearby hay bale and stuck it in his mouth. “You the Englischer that’s moving in?”

The Englischer, she repeated to herself. Then, with a smile, she replied, “My name’s Shana.” She held out her hand.

He hesitated then shook her hand. “Emanuel. My daed said you’d be here for several months.”

“I work in the area,” she quickly explained.

“What kind of work?” He spoke with a gentleness that Shana found soothing.

“I manage a restaurant in Lancaster. Actually, I’ve just been temporarily transferred from my hometown in Connecticut.”

His face lit up. “Connecticut? Why, you must’ve been driving all day!”

Shifting the bag in her arms again, Shana smiled, amused at his sudden enthusiasm. Certainly, not familiar with the speed of automobile travel, Connecticut might have been another continent to Emanuel. “If I hadn’t gotten lost, it wouldn’t have taken me so long.”

Emanuel laughed, his crystal blue eyes crinkling into half-moons and his mouth twisting into a lopsided friendly grin. “Ay, you got lost.” Then, he quickly sobered and lowered his eyes. “Maybe I shouldn’t laugh. It isn’t funny, getting lost, is it?”

“I didn’t mind. The country is so beautiful.”

“Emanuel!” They both jerked their heads in the direction of the female voice calling for Emanuel.

“That’s my mamm.” Emanuel lowered his head as he excused himself. “Ach vell, I must finish my chores ‘fore the evening meal.” He started to walk away then, hesitating, he turned back. “It will be nice to spend some time with you, Shana.” He gave her a final friendly smile before hurrying off to the barn.

The dog barked from the other side of the barn and one of the mules snorted loudly. Shana returned her attention to them, long enough to run her hand down the closest one’s nose. Its velvet flesh warmed her touch. From the other barn, a cow bellowed and Shana quickly glanced over her shoulder at the barn, quiet from noise yet busy with activity. Then, giving the mule one more friendly rub, she whispered, “Good night, big girl,” before she left the mule stable and walked to her house.

It was shortly after eight o’clock, the sun fading rapidly behind the hill, when someone knocked softly at her door. Shana shut the book she had been reading and walked toward the open door. Sylvia stood outside, a bulking towel in her hand. She shuffled her feet, her large eyes peering eagerly inside the house, curious about the few knick-knacks Shana had set about the kitchen. When Shana opened the screen door, the girl handed her the towel then retreated toward the large farmhouse.

For a moment, Shana stared after her. Her two encounters with the young Amish girl gave Shana the impression that Sylvia was equally curious about the non-Amish woman now living on her father’s farm. Shutting the door, Shana peered inside the towel to find three large eggs, nestled in the scratchy, yet clean, cloth.

She smiled to herself and leaned against the door for a minute, listening to the sounds of the farm. The cows wandered noisily from the paddock into the fields. The dog barked twice then quieted down, as though bidding the farm goodnight. Sighing, Shana turned the brass lock. It clicked shut. Amish, Shana thought as she turned off the lights and headed upstairs, tired from moving, anxious about her landlords, and excited about starting work the next day.

Want to keep reading about Shana and her experience living on an Amish farm? Click HERE to purchase The Amish of Lancaster Collection!