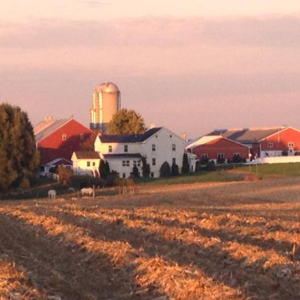 Shana raised her hand to shield her eyes from the mid-day sun. Her dark eyes traveled down the dusty driveway leading to the large, white farmhouse as she opened her car door and, hesitantly, swung her legs to the ground. A summer breeze, carrying the strong odor of manure, rustled her long brown hair as she got out of the car. For a second, she stretched her back, reaching up with one hand to rub the back of her neck as her dark eyes looked around.

Field equipment, most of it aged and rusty, lay scattered around the outskirts of the driveway. From the pastures, a cow bellowed. The noise broke the silence that engulfed the farm. Two cats lounged in the shade of the large white barn, which desperately needed a fresh coat of paint. The smaller of the cats stretched in the sun before it stood up lazily and began to lick its paw.

The other cat lifted its head, noticed the woman standing by the car, and, jumping to its feet, raced alongside the barn before disappearing through the open doorway into the shadows within.

Shana scanned the hillside, the rustle among the cornfield captivating her eyes and ears. The sound, its crisp whistle of tranquility, faintly came and went as the breeze waved back and forth across the field. Leaning against the open car door, she shut her eyes and breathed in the pungent odor of manure. Wrinkling her nose, she kept her eyes shut and listened to the gentle lulling of the cows as they wandered in the fenced-in field between the barn and the corn.

“Hello,” a voice called from inside the barn.

Glancing over her shoulder, Shana squinted and peered in the direction of the voice. A short man, a battered straw hat tilted forward on his head and a mustache-less beard covering his chin, emerged from the depths of the barn’s darkness. His dirty brown pants, held up by loose suspenders, had a slight tear at the knee. He walked toward her, a friendly smile lighting up his golden-brown face. “What can I do for you?”

Drawn out of her momentary lapse, Shana glanced down at the piece of white paper in her hand. “Is this 317 Musser School Lane?”

“317, ja.” The man gave her another smile as he shifted his weight and jammed his hands into his pants pockets. “You the Englischer looking for a place to stay, then?”

Shana glanced around the farm again. She noticed a small boy wearing similar pants and a bright purple shirt peering at her from behind the open barn door. When he saw her staring back, he dashed back into the shadows. Redirecting her attention to the man, she returned his smile. “If you have a place to offer, I’d like to see it.”

The formalities over, he wasted no more time with idle chatter. “I’ll get my daughter to show the room to you then.” The man disappeared into the barn, leaving Shana standing by her car. As she stared after him, her eyes noticed another cat, this one striped and fat, as it scurried out of the barn and across part of the driveway. It leapt into the air as it reached the edge of the grass and tumbled onto its back. Shana smiled as she watched it playing.

A moment later, a young girl, wearing a plain olive green dress with a long black apron covering the front, ran around the side of the barn toward Shana. She was barefoot and her feet were dirty. Her hair was parted in the middle, pulled back, and twisted into a tight bun at the nape of her neck. Yet, her expression was softened by the smoothness of her skin and the glow in her dark brown eyes. She held a single, rusty key in her hand. “You want to look at the room?” she asked, her voice hidden beneath her downcast eyes and thick German accent. The girl led Shana behind the barn and toward a smaller building. “It’s a nice apartment. How long you want to stay?”

Shana waited for the girl to unlock the door. Behind the building was a large cow pen. Beside that was another paddock. Both were empty. “A month or two.” She stepped into the apartment and immediately held her breath. The air was stale, thick of manure. The young girl hurried over to the two windows and, pushing back the simple lace curtains, threw them open.

A small metal table stood in the center of the room and a faded orange sofa sat against the far wall. The walls, painted a dark peach with sporadic red clusters of flowers, added to the emptiness emanating from the rest of the room. Along the walls were several hooks, each painted a clumsy imitation of the dark peach. A small gas stove and refrigerator stood next to the stained sink with two separate faucets, one for cold water and one for hot. A neatly handwritten sign hung over the sink: “No Alcoholic Beverages. No Indoor Smoking. No Pets. Thank you. Katie and Jonas.”

The girl walked quietly across the floor and opened a door. “Upstairs,” she murmured, her eyes darting away from Shana’s.

Holding onto the railing, Shana followed the girl up the tall, narrow staircase, most of the wooden steps creaking under their feet. From the landing, Shana noticed that there were two bedrooms. The one bedroom had carpet but both had the same dark peach painted walls. The bathroom was small and cramped but livable. While there were no closets, each bedroom had a large armoire. And, if each room had one thing in common, they were remarkably clean.

“Who lived here before?” Shana asked as they descended down the staircase.

“Another Amish family. Had so many children they were forced to move.”

Shana stood in the middle of the kitchen and, for a split second, while the girl’s words sank in, she stared at her. Amish. That explained the plain decor and thick German accent, she thought.

Then, when the girl looked back, Shana moved toward the windows, pushed back the curtains, and stared at the green land that stared back. The countryside was untainted by telephone poles or electric wires. The roads lacked racing automobiles or noisy motorcycles. On top of the hill, she could barely make out the outline of a stopped black buggy, so characteristic of the Amish. Letting the curtain fall back, her fingertips lingered on the light fabric before she turned around and followed the girl out of the house. They returned to the barn, Shana walking a pace behind the slender Amish girl. Neither spoke. Nearby, a dog barked until someone called out for it to quiet. Obediently, the dog’s bark dwindled to a low whine until Shana no longer heard it.

The man stood just inside the barn, shoveling manure out of the open cow stalls, the metal from the blade scraping systematically against the damp cement. He set the shovel against the wheelbarrow and wiped his hands on his pants when he heard them approaching. “Sylvia show you the house, then?”

Shana nodded as she looked out the barn doors toward the road. “How far is Lancaster from here?”

“Driving? Vell, let’s see.” He pondered her question for a moment, his thumbs hooked around the bottom of his suspenders, before answering slowly, “Guess fifteen miles or so. Depends on what part you looking to travel. How long you planning on staying?”

“No more than two months,” she answered as she met his gaze.

“Is that a problem?”

The man leaned against the railing by the cow paddock. The tranquil cheerfulness of his expression struck Shana. “Most Englische come and go. You work in the area?”

Shana glanced around the barn as she answered. “I work in a restaurant.” She looked back at the man, who, curiously, seemed genuinely interested. “They just promoted me to a managerial position in the Lancaster branch for a couple months,” she added softly.

The man scratched his beard, as if contemplating what she had just told him before he said, “Ach vell, rate’s usually fifteen dollars a night. But folks mostly come and go, staying for only a night here and there. Since you staying for so long, how’s $250 a month?”

The man held up his hand, as if stopping her from continuing. “If it’s too expensive, let me know and we’ll lower it.”

“That’s just fine,” she heard herself say. For a two-bedroom house, so close to Lancaster, she had expected the rent to be at least twice that. She found herself taking the key from Sylvia as Jonas returned to his work. No handshake, no papers to sign. Just a verbal “ok” after a quick character analysis.

Shana smiled to herself as she left the barn. Tucking the house key in her back pocket, she opened the trunk to her car and began unloading her two large suitcases. Living on a farm after leaving the hustle and bustle of the noisy, polluted New York suburbs with their quick-tempered people and congested roads would be a welcome, if not interesting, change; even if for only a couple of months.

Want to keep reading about Shana and her experience living on an Amish farm? Click HERE to purchase a copy of  The Amish of Lancaster Collection!