No one wants to hear that they have breast cancer. It was four years ago this month when I underwent my double mastectomy, the beginning of an 18-month battle with recovery. For me, it wasn’t the breast cancer that almost killed me; it was the reconstruction.

I approached breast cancer with an “it is what it is” attitude. I remained up-beat and positive, despite the multiple hospital stays, far too many surgeries, blood transfusions, excessive pain, and daily IV antibiotic treatments. But there was a lot of collateral damage.

Personally, I believe that people “closest” to me forgot that I was battling for my life. Without doubt, had I not caught my breast cancer, I would be dead today. My tumor which I was told was “caught early” had actually spread to lymph nodes and grown into my chest wall. My surgeon did not get a clean margin. And then I almost died from infections, underwent the removal of my reconstructed breasts, and so many other awful things that I think I’ve blocked some of it out.

I had a lot of support from some family members and a lot of of support from my friends and readers. However, if you ask some people, they would claim they were “there” for me and my kids (they weren’t). Inviting my kids to the pool or yelling at them at Halloween because they didn’t feel like trick-or-treating with other kids was not being “there” for my children. Both of my kids needed someone to spend one-on-one time with them, to help them through the emotional upheaval that they were feeling. Their fears. Not going to a pool, for crying out loud.

There was so much insensitivity to what was going on in my world that it was truly disturbing. I suppose that goes with the whole entitlement trend: if it’s not about me then I simply don’t care.

People often ask me if The Faded Photo was about my experience with breast cancer. I used to answer “No.” However, in hindsight, there is a very strong element of truth to the story. While my husband, my parents, and my good friends were there for me, there were few others who were.

The Faded Photo shares that perspective of my experience, how oblivious people can be to what is going on in other people’s lives. And when some people confront the truth, others react with shock because it’s simply not “politically correct” to do so.

Says the people who avoid the truth because it is inconveniently not about them.

The following excerpt from the book is a perfect example of this. Consider the way that Frances’s mother reacts when Frances blatantly asks Mrs. Bentley about her disease. That, my friends, is the framework for the story…the very foundation on which Frances deals with her own illness years later. 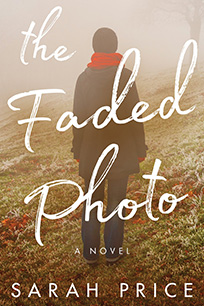 The fresh layer of snow— something that usually excited Frances more than anything— did nothing to cover up the fact that she would have to sit in an old-fashioned red sleigh next to a dying woman.

“Why me?” Frances turned from the window as her mother hovered over her, about to brush her brown hair. “No one else has to go!”

“Never ask ‘why me.’ You know I don’t like that. Sometimes in life you just have to do what you have to do. Besides, you don’t know the plans God has for you. Or for others, for that matter.” Her mother jerked the brush a little too roughly through a knot at the nape of Frances’s neck. “And what is with all of these questions? Why didn’t you wear your Mary Janes? I specifically told you to put them on.”

Frances winced as another knot was attacked by her mother’s the nape of Frances’s neck. “And what is with all of these questions? Why didn’t you wear your Mary Janes? I specifically told you to put them on.”

Frances winced as another knot was attacked by her mother’s swift hand. “I hate Mary Janes. They’re stupid-looking and too big anyway.”

Her mother took a step backward and glared at her in the mirror. “You’ll grow into them, Frances. Now, enough complaining out of you.” Her mother leaned forward and turned on the water faucet, dampening the brush, which made it smell bad.

Wrinkling her nose, Frances leaned away from her mother. “I just don’t understand why I have to go!”

“She’s dying, Frances, and you know how much she loves you!” Her mother tried to slick down the cowlick at Frances’s crown. “It’s just one photo, probably the last one we’ll have of her.”

“I don’t want to be in a photo with a dead person!” The thought had terrified Frances from the moment her mother had come up with the idea the previous week.

“Oh, stop it! She’s dying, not dead. How would it appear to other people if you denied her this last wish? You know she has no children of her own.” Tossing the damp, smelly hairbrush into the sink, her mother stood back and assessed the finished product with a half-pleased expression. “You look well enough, I suppose.”

Frances made a face that did not go unnoticed.

“Honestly, have some compassion, Frances Lynn! Imagine how scared she must feel, poor Mrs. Bentley!”

But Frances didn’t want to imagine how their neighbor felt. All Frances could imagine was having to stand in the freezing cold— something she hated more than anything!— for a photographer to take what might be the last photo of Mrs. Bentley for a Christmas card. And why, Frances wondered, would Mrs. Bentley want a photo with me, anyway?

The battle with her mother ended even before it began. At nine years of age, Frances couldn’t possibly win, not against an adult, let alone her mother, who, it seemed, always won, regardless of the opponent.

Her mother glanced at the clock and made a noise of exasperation. “Let’s hurry it up, Frances. I have a lot to do this afternoon. You know how your father likes his Saturday night pot roast promptly at five o’clock.”

As soon as her mother invoked the father card, Frances knew better than to dawdle any longer. If her mother lived for social appearances, her other focus in life was catering to her husband.

And so, at eleven o’clock on a Saturday morning, Frances found herself sitting in the red wooden sleigh, her stuffed elephant tucked under her arm, trying to smile as she inched away from Mrs. Bentley, just in case whatever the woman was dying of was something that she could catch.

It was cold out, and the ground was now covered with at least two inches of snow. Even though she wore her blue coat and tan knit hat, Frances was freezing from all of the sitting around while everything was made “just right.”

“Closer, dear,” the photographer said, gesturing with his hand for Frances to move into Mrs. Bentley’s arm that was wrapped around her. The elephant fell out of the sleigh, and as Frances moved to retrieve it, the photographer stopped her. “Perhaps you should stand next to her.”

Glancing at her stuffed animal that lay in the snow, Frances sighed and stood up, hoping that her mother wouldn’t step on it.

The photographer smiled. “Much better.”

But Frances did not feel much better. In fact, she felt much worse.

Mrs. Bentley, however, did not seem to notice. At forty-two, she was still pretty. Frances liked her short black hair that framed her face. With her dark winter coat and red hat that sat just so on the back of her head, Mrs. Bentley did not look sick and, therefore, did not look like she was dying.

And that’s when Frances did the unimaginable: she spoke without thinking.

“Mom says you are dying.”

The second she heard her mother gasp, Frances knew that she was in trouble. But the words were out there; she couldn’t take them back. Besides, she argued with herself, Mom did say that!

Mrs. Bentley, however, didn’t seem to mind. She merely hugged Frances closer against her side and kissed the top of her head. “Aw, sweet Frances! How I love your honesty. It’s so refreshing to have someone say what they are truly thinking! It’s so much better than all of the whispers, side looks, and pity. I’d much rather people ask me what’s on their mind than tiptoe around the subject. It’s better than being seen as a pity case.”

In Frances’s mind, Mrs. Bentley’s words vindicated her. To her further satisfaction, her mother had been unknowingly implicated by Mrs. Bentley.

“I have cancer, Frances.”

“Cancer?” It was an unfamiliar word to her, and once again, she wondered if that was anything like a bad cold. She leaned away, just a little, and hoped that her mother didn’t notice.
“It’s a bad disease when your body starts fighting against itself. No one really knows how it starts. And the cure for it depends on the type of cancer and how long a person has had it before discovering it.”

“What type do you have?”

“Breast. It started in my breasts,” Mrs. Bentley said, gently placing her hand on her chest. “But now it has spread to other places in my body.”

“So cancer is going to make you die?” Frances asked.

Her mother gave her a stern look. “Frances!”

But Mrs. Bentley didn’t seem to mind. “It is, Frances.”

“Frances!” her mother said in a sharp tone. “That’s enough!”

But Mrs. Bentley ignored her mother’s reprimand. Instead, a smile spread across her face as she responded to Frances. “Am I scared? No. Not in the least. Crying about it or being sad will not change the fact that God wants me home, my dear child. My time on earth is finished. I have a much greater future ahead of me.”

Frances did not know how to respond. If she had cancer, she knew she would be scared. And she certainly would not be taking photographs in a sleigh while it was snowing with a child that lived down the street! But Mrs. Bentley didn’t have any children of her own, a fact that had made Frances’s mother even more adamant that the photo shoot take place.

As she stood beside Mrs. Bentley, smiling for the photographer, she couldn’t help but think tha1-t life without having children was even sadder than the fact that Mrs. Bentley was dying. After all, what was the purpose of life if you didn’t have a family? Mrs. Bentley would die and be put into the ground without anyone to remember her years later. The memory of her life would fade away, probably by the time the first snow fell next winter. And by then, just as no one talked about Grammy or Grandpa anymore, no one would remember Mrs. Bentley or the silly photograph that she was posing for at the current moment.

Frances did as she was told, not just smiling but grinning for the photographer as she stood next to the dying woman in the old-fashioned red cutter sleigh for a Christmas card that no one would remember in years to come. The only thing Frances would remember about that day was that the ground was covered by snow and that she hoped, later, her father might take her sleigh riding.

One thought on “An Excerpt from The Faded Photo”