What an amazing day!  I can only tell you that it was the highlight of my trip (so far)…mostly because I’m enthralled by historical sites. That’s my thing…history.  Perhaps that is why I love the Amish so much…they live in the past but within the current world.

Our day started off by waking up at 8:37am. My husband rubbed his eyes, looked at his watch, and declared “Oh my gosh! It’s 8:37!” Our private tour guide was to pick us up at 9:00!  So we hurried through the process of getting ready and racing downstairs to grab some breakfast which was limited to two spoonfuls of scrambled eggs and moussaka before being dragged out to the car. Knowing our tour guide, I knew how important those few bites were because he doesn’t stop for breaks or food. This man in intent on showing us as much history, sites, places, and tourist traps from a non-tourist trap perspective that he can cram into a day. Love this guy! 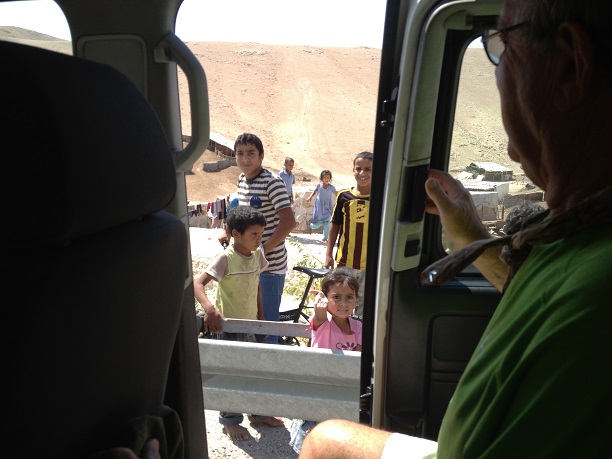 We start by driving forever toward the Dead Sea. Along the way, we see Bedouin encampments along the way. They are the Israeli version of gypsies. They live wherever they want in the desert, stealing water from the government pipelines. Quite often, the husbands have multiple wives and travel from encampment to encampment.

We made the mistake of stopping to take photos and were attacked by a herd of children who appeared from no where. The children screamed out “MONEY! MONEY! MONEY!”  (see photo and, while I did not ask permission to post the photo on the Internet–something they probably haven’t even heard of–we did pay the children money–fair trade, yes?).

Next we arrive at Qumran, the location of the Dead Sea Scrolls discovery. Having read the Dead Sea Scrolls, I was chomping at the bit. It was gorgeous! So amazing to walk in the steps of these ancient religious men…one of which is presumed to be John the Baptist (but not proven). Having been a student of archeology, I was beyond fascinated with the layers of history that unfolded before my eyes. One cannot describe the feelings of being in the place where was discovered (by a Bedouin…money well spent earlier!) the earliest parchment with (pieces of) the books of the Bible…every book of the Bible except Ester. Poor Ester…left out by the all-male community of scribes!

We could see the cave from the hillside. It brought chills to my skin. There…so close…and SO RECENTLY…was the place of this discovery.  I cannot wait to return home to dive back into my books to re-read them and make notes in the margin.  Chills…

On the way out, we passed over a 2000+ year old cemetery at Qumran, so obvious that most people pass it. I found a  stone to give to my friend, Karen. She likes to collect stones and I thought this would be a lovely one to give to her.

Next stop….MASADA. I have been waiting my entire life for this stop. When I was a young child, I watched the miniseries with my mother. It has haunted me ever since that time. The feelings I have about Masada are similar to my feelings about the Anne Frank story. Ironically, they are quite connected…albeit 2000 years apart. We took the cable car to the top of the mountain and I felt the chills of 2000 years of history fall upon my shoulders. At the top of the mountain…on the hottest day of the year (120 degrees!)…we walked through a small shelter and were staring at houses and palaces and walkways that were walked by the Zealots that fought the Romans in the days immediately following the crucifixion of Jesus. While they didn’t not believe in Jesus as the Messiah, they did believe in freedom and wanted to be rid of the Romans. The story of the people of Masada is a true reflection of the fight of the people of Israel and, in my own opinion, is important to all people, Jewish or Christian.  Find the movie and watch it. Amazing.

My husband and I decided to descend the steps to Harold’s tiered palace, despite the warning from the guide not to do this. After about several minutes, climbing down stairs in 120 degree heat, I realize why (1) no one else is descending the side of the mountain like a spelunker on stairs and (2) the guide said that we really shouldn’t do it. But I refused to admit defeat. Each step down is going to be one step upward when we are done. The lower level of the palace is amazing (see photo) and I’m in awe that I’m standing here. In America, you’d never be able to do this. Some person would fall, trip, or jump over the side and their family would then sue the park system.  (frown)

On the way back up, I start to feel the burn in my calves and begin the now-common-chant of “I think I can!” and my husband is laughing at me. When we reach a level that is shaded, I collapse against the wall…panting…and look at him. “Who was the fool who suggested this???” He raises an eyebrow and looks at me but is a gentleman…he doesn’t answer that I am that fool.  This is one of many reasons I love him.

We survive the journey back up the side of Masada and, while I’m completely dehydrated, happy that I didn’t collapse or fall off the side.

Next, I’m sitting in the world’s oldest standing synagogue. The guide is talking about the Masada men and how they drew lots as to who would kill the men who had just finished killing their wives and children in order to escape the enslavement of the Romans. My cell phone bings. Everyone looks at me. I shrug and grab my iPhone, wondering what this is costing me. “Can I use our account at the horse store for new boots?” is the message from my daughter. So much for history…I’m dealing with the here-and-now with my daughter texting me permission to buy new boots while I’m sitting in the world’s oldest synagogue atop of Masada, listening to the guide talk about the past. Amazing…(and I’ll probably faint when I see how much that one simple question from my little one cost me!).

After Masada, we went to the Mineral Beach on the Dead Sea. It was later in the afternoon and hardly anyone was there. So, I march right into the water, sit down and…float. Like a little buoy, I pop to the surface. I start to call out how neat it was when I start to feel a searing pain on my legs. It feels like someone is jabbing me with a thousand knives. And it dawns on me…Salt+Shaving=Searing Pain. I lasted about 5 minutes floating before I high-tailed it to the showers to rinse the salt from my legs.

“They should have a sign posted,” I complain to my husband who is laughing at me. “Don’t enter the water if you have shaved any part of your body in the past month!” Of course, if they did have that sign, it would be in Hebrew and I’m not so hot at reading that language.

“Put some mud on it,” he says. So I trot over to the tent where the mud barrels are waiting. Two men bring me a freshly dug up barrel and I’m suddenly like a Daisy Doodle in a mud pit! Happiness is being covered in layers of mud!

The evening ended with us crowded around a baby grand piano, listening to traditional Israeli music and dancing with scarves in circles. Two little Israeli men clapped and grinned from ear to ear. We even got them to dance with us.