Well, we still have three more days here in Israel but I’m sure glad that today was a “do nothing” day.

So far, we have been all over Israel: Jersualem, Tel Aviv, Caesarea, Capernaum, Tiberias, Golan Heights, Mount of Beatitude, Netanya, Masada, Nazareth, Mount Carmel, Magdala, and I’m sure I’m missing some places (and probably misspelled a few)! I’ve floated in the Dead Sea (ouch…stings), played in the Sea of Galilee, and prayed in the Jordan River. Today was a great break from “do everything”.

I’m actually working on my next segment of The Amish of Ephrata. Once again, it will be an Amish Novella in Morality. I certainly have enough fodder for many, many of these novellas…of that, you can be sure and certain!  😉

Since I missed a few days, I thought I’d upload some “highlights” from my perspective of the trip that I don’t believe I posted already. 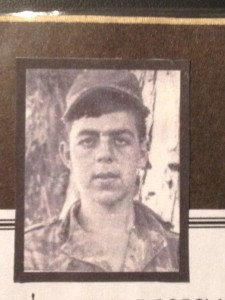 Many of you regular readers are already aware that my husband lived in Israel for a while. As such, he was part of the army. And…as such…he fought in several wars.

When he had first joined the army and was involved in one of his first assignments in Yataar, Lebanon, they were ambushed.

This man in the photo to the left saved my husband’s life. He was about 22 years old. He shoved my husband down during the ambush. Three bullets were fired and this young man was dead.

For years, my husband has talked about this man. We were able to find his memorial at the Golani Museum. The people even printed out a copy of his biography and encouraged my husband to submit his own story to be added to the archives.

“Your husband is a hero!” the head of the museum said. Well, I already knew that. But I was glad to share in the rediscovery of the man who gave his own life so that my husband could live his.

It was a touching moment for both my husband and myself.

*Note: At my husband’s request, I have not provided his name… 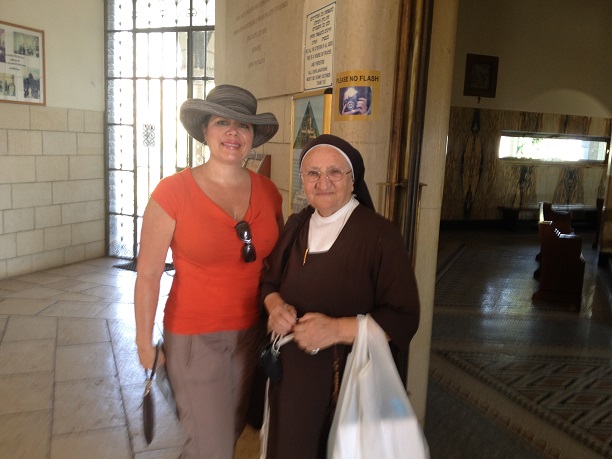 Standing on the place where Jesus gave the Sermon of the Mount was a highlight. How could it not be amazingly special?

I was really impressed with the peace that surrounded the church. The gardens were immaculate. Everything was green and lush, flowering and beautiful. It was simply awe-inspiring.

Of course, meeting the nun from the Mount of Beatitudes was a wonderful moment. She was so sweet and wise. I really enjoyed speaking with her and her words about Jesus being everywhere really touched me.

Highlight #3: The Sea of Galilee 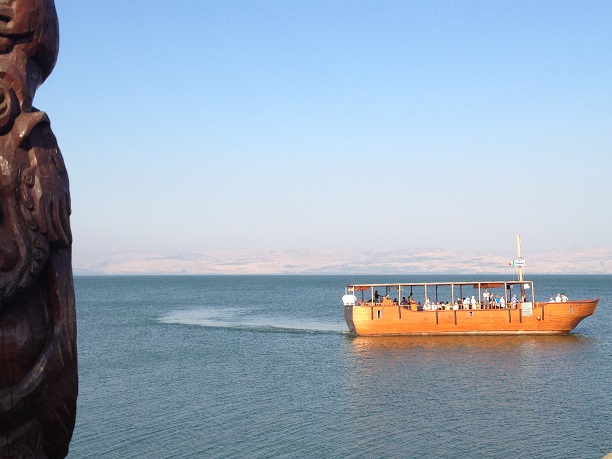 The Sea of Galilee is calm and beautiful.

One day, we took a boat trip. We started near Capernaum and traveled 45 minutes across the Sea of Galilee to our hotel in Tiberias. We were the only people on the boat and it was so relaxing and peaceful, the sun setting behind Tiberias as we glided into port.

It was easy to shut my eyes and imagine the fishermen in their boats, working so hard to catch food for their families and their community. But what a lovely way to do it! Mountains surround the water and it’s just a gorgeous place. 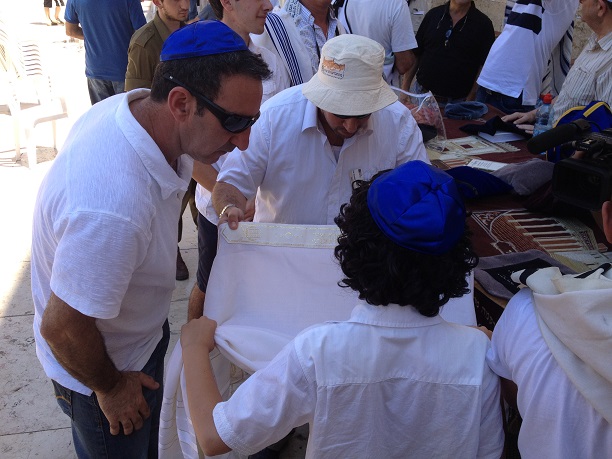 I know that I already posted about this but it was really special. To participate in a centuries old ritual in the middle of Jerusalem? Amazing.

We also enjoyed celebrating with the family a few days later at the world’s most amazing bar mitzvah dinner, complete with costumes and dancing and henna and music from around the world.

Highlight #5: Crawling Through Tunnels Under the City of David 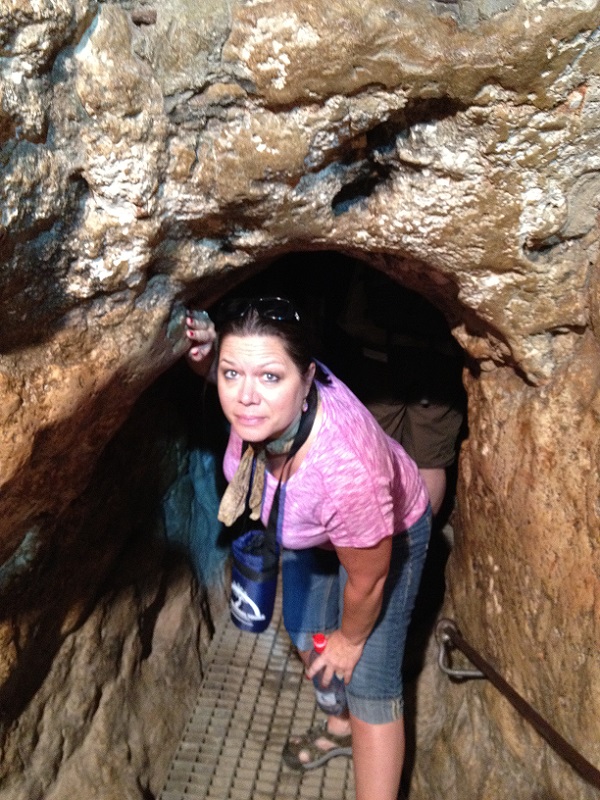 This was scary. The tunnels went on forever and ever! It was dark (no lights) and filled with water. We had to bend down and even move sideways through the tunnels. Part of the way through, I started thinking to myself, “Boy, this is DUMB!”

However, considering it was so hot outside, the freezing cold water (waist high as some points) felt really good. But, given that I’m claustrophobic and not a big fan of dark, creepy places, my heart was racing the whole time (that’s FEAR on my face in the photo) and I was beyond relieved when, 45 minutes later, we emerged alive!

These tunnels were built during the time of King David in order to create passages for water to the city. 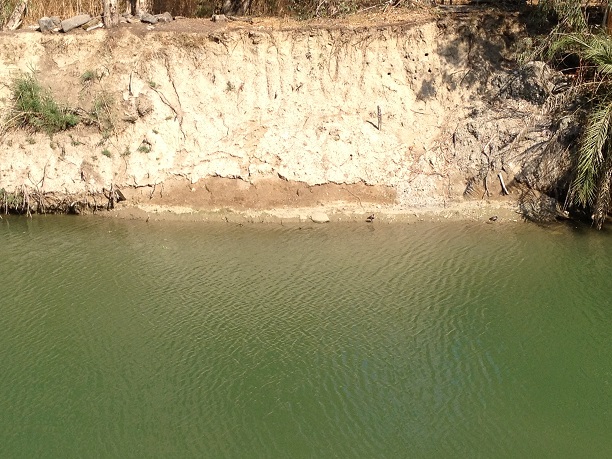 I already posted about this, I believe (sometimes I forget where I post the things I write so forgive me if I’m repeating myself).

The Jordan River was just the most amazing place to be. This is where it all began.There is an amazing aura at the place…peace, tranquility, faith.

As a side note, I really gave no second thoughts to jumping in the river and walking around a bit. There were TONS of catfish at my ankles. I tried to catch one of them and managed to get whacked in the arm by its slippery fat tail. I suppose it served me right…

You simply cannot come to Israel and avoid Masada. It is an amazing place. The history is so rich and telling about the Israelites.

This photo shows the ramp that the Roman soldiers made in order to get their tower and battering ram up high enough to breach the walls. I can only imagine what the Jewish families felt as they knew the final hours were upon them. What a decision they had to make!

I don’t think I could have made it… 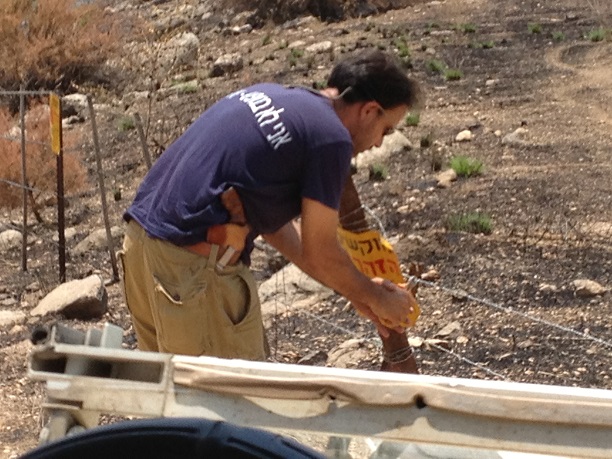 This gentleman (whose name I cannot remember) took us on a jeep ride through the Golan Heights. Please notice what is hanging from his belt (hint: Charlton Heston would be proud). Yes, the tour guide was packing some heat since we were near the Syrian border again.

He was hilarious in a crazy, fun kind of way. In this picture, he is cutting barbed wire that someone put up with a sign that reads “MINE FIELD” Why would he cut barbed wire? Any sensible person would ask that question. His answer? “I know there are no mines in there and I want to show you something.” Oh, OK.  I feel better now. 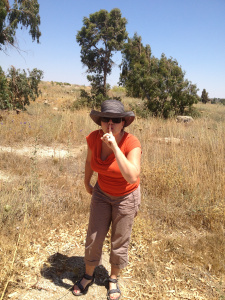 When we were at the Golan Heights, we could hear the bombing outside of Damascus. That’s how close we were.BOOM! BOOM! My heart was really racing when I realized what it was.

On our way down the ridge, I made a couple of comments about wanting to step on Syrian soil, just so I could say that I did it.

Well, our private tour guide took that as a personal challenge and managed to finagle our way down some dirt roads and past warning signs (full of bullet holes) just so I could jump out of the car and collect my Syrian rocks before we raced back to Israel.

My husband wasn’t too happy with me about this one but, by now, he’s used to my sense of adventure.

To be continued…(we haven’t finished the trip yet).