This week marks a major milestone in my life. Yesterday, the first three books in my Plain Fame series, were re-released by Waterfall Press (an imprint of Brilliance Audio which is owned by Amazon Corporate). 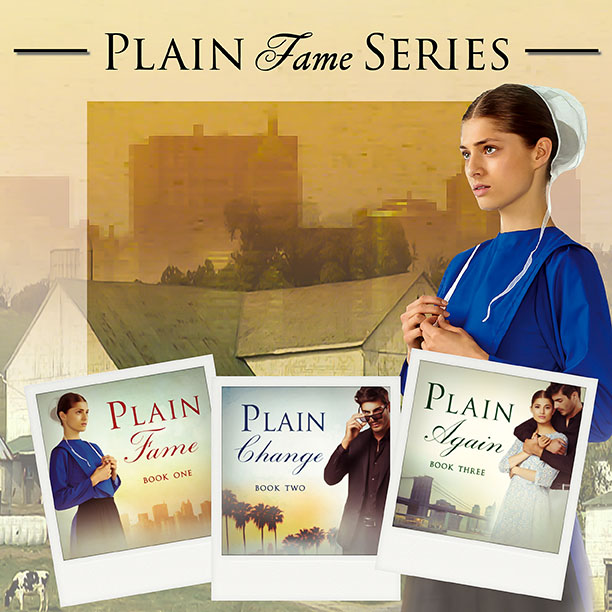 For those of you who are not familiar with this series, the story follows the most unlikely of relationships: a young Amish woman and an international superstar, Alejandro Diaz (aka Viper).

They meet under unusual circumstances in New York City when Alejandro’s limo accidentally hits her outside of Madison Square Garden. As she recovers in the hospital, Alejandro begins to feel that she is his responsibility. Consequently, a very endearing friendship begins to develop.

The idea for this book came to me when I was walking to work in Manhattan one day. We all have celebrity crushes and mine just happened to be performing in Rockefeller Plaza on this particular morning. Rather than going to see him perform, I had to go to work. Someone made a joke to me that maybe I’d get lucky and his limo would hit me.

The lightbulb went off in my head.

Ideas can come from the most unlikely of places and the most unusual of times. This was definitely true of the Plain Fame series.

The original series went viral and immediately climbed to the top of Amazon’s bestseller charts. With almost 1000 combined reviews, the series was widely received. Now, thanks to Waterfall Press, the books have been redeveloped and repackaged with distribution bringing it to bookstores and online for new audiences to enjoy.

I welcome your thoughts and comments on this exciting series as well as comments as to how Amanda and Alejandro have impacted your life. For me, they have changed everything. I know that even the impossible can happen…and with a lot of faith, there is nothing that God cannot do.

Where to purchase The Plain Fame Series: