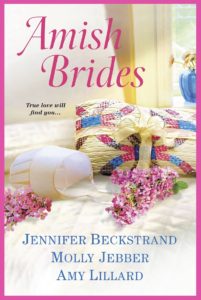 Anna and Felty Helmuth—the Matchmakers of Huckleberry Hill—are back and as feisty as a pair of eighty-plus-year-olds can be. Anna might have a few more creaks in her knees and cricks in her neck, but she’s as eager as ever to make suitable matches for her poor, forlorn, single grandchildren. In Return to Huckleberry Hill, Anna and Felty’s grandson Reuben just wants to be left alone, but nobody can withstand Anna Helmuth when she has a match up her sleeve. The Reluctant Groom is one of the stories you’ll find in Amish Brides, a collection of three Amish love stories from me, Molly Jebber, and Amy Lillard.

In Return to Huckleberry Hill, Reuben Helmuth is plenty bitter. He’s fed up with girls, two-faced friends, and people in general. His best friend, John, betrayed his trust and is now engaged to the only girl Reuben ever loved. Reuben is getting along just fine wallowing in his misery until John’s sister Fern shows up in town and starts making a pest of herself in an attempt to mend fences. It’s bad enough that she won’t stop preaching to him about forgiveness, but she claims she wants to be his friend too. Can’t he just be rid of her?

Suvie Newswenger is in a pickle in The Reluctant Groom. She’s twenty-eight years old, and she refuses to settle for just any boy in the community. That’s why she has her eye on handsome, brooding Aaron Beachy, Anna and Felty Helmuth’s great-grandson. Aaron is kind, humble, and godly, and his wife has been gone for almost three years. But snagging a husband like Aaron will take single-minded determination and Anna Helmuth’s best recipes. Can Suvie, with the help of Anna’s Spam-and-asparagus casserole, convince Aaron to open his heart and find love again?

#10 Anna couldn’t keep a smile from her face. “Isn’t it wunderbarr that Titus found love right here in our kitchen? It didn’t even matter that both his goats pooped on my rug.”

#9 “All young men should be married before they make nuisances of themselves. Bachelors and fish stink after three days, you know,” Anna said.

#7 Anna clucked her tongue. “Did he try to share his bran flakes with you? That’s enough to scare any girl off. What good are bran flakes except to keep him regular?”

“Maybe he likes that they keep him regular,” Felty said. “No girl wants a boy who isn’t regular.”

Anna huffed out an impatient breath. “What’s romantic about being regular?”

#6 The wrinkles puckered around Anna’s mouth. “That boy is determined to scare girls off with his breakfast cereal.”

#5 “Well, he’s not going to catch a wife with bran flakes. Somebody needs to tell him that being regular is not the least bit romantic.” Anna let Felty help her into the buggy. “Ach, Felty.

Sometimes I think nobody would get married without our help. Die youngie are so thick sometimes.”

#4 Dawdi reached into his bag and retrieved two boxes of breakfast cereal. “Your mammi wants you to try these.”

Aaron stuffed his dishrag into his pocket. “Captain Crunch and Fruit Loops?”

“Captain Crunch Peanut Butter. They’re the most romantic cereals she could find on short notice.”

The other thing in Dawdi’s bag was a tub of cheese curds. “Your mammi says these will plug you right up. That’s all I have to say about that.”

#3 Anna nodded and clapped her hands together. “Do you have a spare rosebush in your greenhouse? We’ll pay double the price.”

Suvie was getting more confused by the second. “I have three rosebushes—a Horace McFarland, a Mister Lincoln, and a pretty pink variety.”

Anna paused with her mouth open, at a sudden loss for words. It didn’t take her long to recover. “Well. Bring the pink one. We don’t need those other two boys getting in the way.”

#2 “The best day to plant is always today, even in the rain.”

#1 “This is part of your wedding present,” Anna said, tapping her finger on the box.

“Four boxes of Cocoa Pebbles, twenty Peanut Butter Captain Crunch, five Fruit Loops, and one Count Chocula. I’m not sure about that one, but it has a very interesting picture on the front of the package. And no bran flakes.” Anna leaned across the table and pinned Aaron with a stern gaze. “Don’t ever buy bran flakes again. You never know what could happen.”

Felty shrugged. “Well, Annie. They do keep you regular.”

Anna shook her finger at her husband. “Aaron and Suvie do not want regular. They want wunderbarr. No more bran flakes for them.”

Jennifer Beckstrand is the RITA nominated and award‑winning author of the Matchmakers of Huckleberry Hill and The Honeybee Sisters series. Novels in her Matchmakers of Huckleberry Hill series have been RITA® Award and RT Book Reviews Reviewer’s Choice Award finalists, and Huckleberry Hill won the 2014 LIME Award for inspirational fiction. Huckleberry Hearts was named a Booklist Top 10 Inspirational Fiction Book of the Year. Jennifer has always been drawn to the strong faith and the enduring family ties of the Plain people. She and her husband have been married for thirty-three years, and she has four daughters, two sons, and four adorable grandchildren, whom she spoils rotten. Please visit her at www.JenniferBeckstrand.com

When it comes to matchmaking, Huckleberry Hill, Wisconsin’s unstoppable octogenarians Anna and Felty Helmuth never seem to run out of opportunities—or grandchildren… 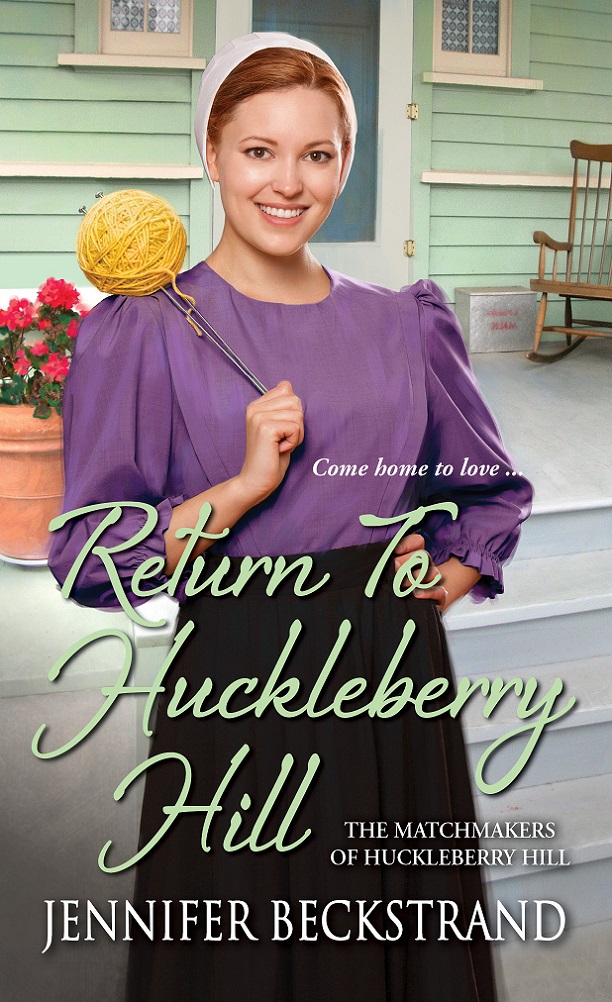