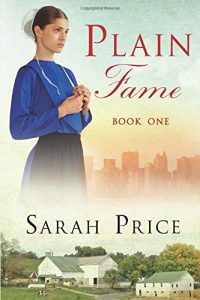 That’s right! I was floored that my publishers are doing a 20-day 100 book giveaway on Goodreads. What a great way to kick off the summer! It’s part of their “Read a Series” promotion and, let’s face it, who doesn’t want to melt into a wonderful series during the lazy days of summer?

Of course, I’ll be writing a series rather than reading them…most likely.

The Plain Fame series begins with the first book, Plain Fame. Readers will meet Amanda Beiler, a young Amish woman who accidentally meets Alejandro Diaz, a Cuban rock star known as Viper. While she is not familiar with him, his fame, or his reputation as a womanizer, Amanda soon becomes entrenched in the hearts of social media who fall in love with her. Unfortunately, her community becomes inundated with paparazzi and she has a choice to make. That one decision will impact her future and change everything for Alejandro.

A nice clean and wholesome series to read, whether you are lounging on the dock, sitting by the pool, or enjoying the ocean.